SC stays centre's notification on sale of cattle for slaughter

The Supreme Court on Tuesday ordered a nationwide stay on the government's new rules that banned the use of cattle markets for trading cattle for slaughter but allowed the centre to come up with amended rules. 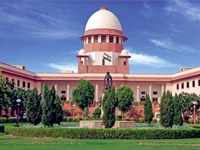 A bench of Chief Justice Jagdish Singh Khehar and Justice DY Chandrachud upheld an earlier order of the Madras High Court that stayed the centre's notification on sale of cattle, including cows for slaughter, saying it will continue and would be applicable across the country.

The apex court, however, took note of the central government's statement that it was reconsidering the notification by taking into account various objections and suggestions of stakeholders and would come up with an amended notification

The centre told the court that it would be renotifying the rules after considering objections from the stakeholders.

"Needless to say that the interim direction issued by the Madurai Bench of the Madras High Court shall continue and extend to the entire country," the bench said.

The SC passed the order on a petition filed by a Hyderabad-based advocate Mohammed Abdul Faheem Qureshi, who challenged the 26 May notification as "arbitrary, illegal, and unconstitutional."

According to the petitioner, the government order was "against the freedom of religious practice to sacrifice animals" and violated the right to food, privacy and personal liberty guaranteed by the Constitution.

While animal sacrifice is banned in India and the evil has been stopped among many religious groups, Muslims still consider as their right to sacrifice animals, especially during the Eid festival.

Opponents of the centre's 23 May notification banning sale and purchase of cattle from animal markets for slaughter say the move will hit export and trade of meat and leather.

The Madras High Court in May had stayed for four weeks the centre's notification banning sale and purchase of cattle from animal markets for slaughter.

Amidst a raging row on the trading ban by non-BJP parties and state governments of Kerala, West Bengal and Puducherry, the Kerala High Court had upheld the center's notification saying the order was all about use of animal markets and dot not amount to a ban on butcher trade.