In a blow to Bihar political heavyweight Lalu Prasad Yadav, the Supreme Court today ruled that the Rashtriya Janata Dal chief and other accused must face separate trials in each of four cases related to the Rs900-crore fodder scam. 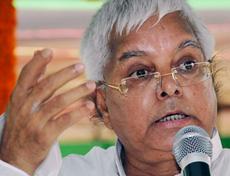 The apex court has set aside the High Court order, which had said that the entire conspiracy in the fodder scam was one and hence Lalu Prasad cannot be tried separately for each illegal treasury withdrawal.

Along with Yadav, Jagannath Mishra and ex-top bureaucrat Sajal Chakraborty will also face trial in the case. The apex court also ordered that the trial court complete the trial within nine months.

Former chief minister Lalu Prasad (98), whose RJD is now part of the Nitish Kumar-led coalition government in Bihar, has already been convicted by trial court and sentenced to five years' jail in the Chaibasa treasury withdrawal case.

The SC criticised the Jharkhand High Court for dropping a conspiracy charge against Lalu Prasad in the Deoghar treasury case, saying, "The HC gave relief to Lalu Prasad ignoring settled principle of law."

The court also slammed the Central Bureau of Investigation for delay in filing appeal against dropping of charge against Lalu Prasad.

The agency failed to live up to its reputation, the court said.

Earlier on 20 April, the apex court had reserved its judgement in the case and asked all parties concerned to give their submissions within a week.

The court also heard the plea filed by the RJD supremo challenging his jail sentence in connection with the mid-1990s fodder scam case.

The CBI had filed a plea in the apex court against the dropping of the conspiracy charge against Lalu Prasad by the Jharkhand High Court in one of the fodder scam cases.

The probe agency then filed its latest appeal against the high court order, which while upholding the agency's plea to continue proceedings in the trial court against Prasad under two sections, dropped other charges on grounds that a person could not be tried twice for the same offence.

The High Court had ordered that proceedings against Yadav be continued under Indian Penal Code Sections 201 (Causing disappearance of evidence of an offence committed or giving false information) and 511 (Attempting to commit offences punishable with imprisonment for life or imprisonment, and in such attempt doing any act towards the commission of the offence).

The charges are in connection with the allegedly fraudulent withdrawal of Rs96 lakh from the state treasury during Yadav's time as chief minister.

The fodder scam relates to allegedly fraudulent withdrawal of around Rs1,000 crore by the animal husbandry department from various districts when Lalu was the Bihar Chief Minister from 1990 to 1997.