In an effort to curtail the VIP culture in India, the government on Wednesday announced official vehicles of dignitaries across the country - including the President, the prime minister and union ministers - would not flaunt red beacons on their roofs from 1 May. 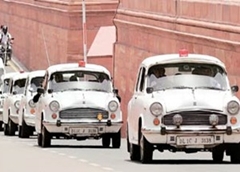 "From May 1, no red beacon will be allowed atop any official vehicle. There will be no exceptions," finance minister Arun Jaitley told reporters in New Delhi.

Vehicles involved in emergency and relief and rescue services, ambulances, and fire services, will be allowed to put blue beacons, the minister said.

A decision to this effect was taken at a union cabinet meeting presided over by Prime Minister Narendra Modi on Wednesday.

Jaitley said the government will bring about the necessary amendment to the Central Motor Vehicle Rules, 1989, in this regard.

"Rule 108 deals with use of red, white and blue lights on vehicles. Rule 108-1 (III) says the centre and states can specify dignitaries who can use beacons on their (official) vehicles. It is a central rule and is being abolished from the rule book," Jaitley said.

He said it means no dignitary at the centre or in states could henceforth use beacons on their vehicles.

The minister said a rule that empowers the centre and state governments to use blue beacons with flasher is also being changed.

"Only defined emergency services will be allowed to use blue beacons with flasher," Jaitley said.

The decision also intends to strengthen democratic values in the country, he said.

Several state chief ministers were quick to announce they would implement the new rule. Captain Amarinder Singh and Yogi Adityanath, the new chief ministers of Punjab and Uttar Pradesh, have already taken steps to either end or restrict VIP culture.

In its first cabinet meeting, chaired by Captain Singh, the newly formed Punjab government decided to completely shun the VIP culture by removing the red, yellow and blue beacons from their official vehicles.

Goa chief minister Manohar Parrikar has already removed the red beacon from his official car, and has asked his state cabinet colleagues to do the same.

The opposition Congress too welcomed the government's decision, but termed as "laughable" the Bharatiya Janata party's attempt to blow the trumpet of morality over it.

The opposition party said the move was only a step towards ending the VIP culture prevailing in the country. It added that it was good to see the saffron party catch up with the "progressive policies" of the Congress.

"The Supreme Court had given its verdict on December 10, 2013 about which cars be allowed and which ones not for use of red beacons. If after three-and-a-half years the BJP is trying to do politics over this and blow the trumpet of morality, then there can be nothing more laughable," Congress spokesperson Manish Tewari said.

Chief spokesperson of the Congress Randeep Surjewala welcomed the development.

"The Congress welcomes the end of Red Beacon culture in India, a campaign that we launched and implemented in Punjab. To stop Red Beacon is one step in ending VIP culture. It requires an innate belief in public representatives as peoples servants and not masters," Surjewala said in a series of tweets.

He also listed a host of initiatives taken by the erstwhile Congress government to ensure accountability of public representatives.

Surjewala said the Congress government had made the assets declaration of ministers, MPs and bureaucrats compulsory, besides enacting the RTI Act, the Lokpal Act and the Whistleblower Protection Act.