Impugned Calcutta High Court judge C S Karnan on Thursday passed an order directing seven judges of the Supreme Court, including Chief Justice of India J S Khehar, to appear before him on 28 April at 11.30 am at his residence in Kolkata. 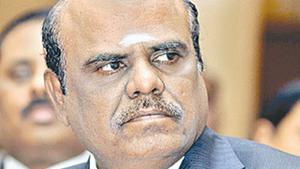 ''On 28.04.2017 at 11.30 a.m. the honourable 7 judges as mentioned above will appear before me at my Rosedale Residential Court (residence) and give their views regarding quantum of punishment for the violation of the Scheduled Castes and Scheduled Tribes Atrocities Act.,'' Justice Karnan said in his nine-page judgment, which was handed over to journalists.

In the order, the judge said that on March 31, he had pronounced a judgment ''wherein the 7 judges are accused under the Scheduled Castes and Scheduled Tribes Atrocities Act.''

Justice Karnan repeatedly stated that all the 7 judges were offenders under the SC/ST Atrocities Act, citing instances of ''insult to him'' and ''not allowing him to carry out his judicial and administrative work''. The order also said, ''All the 7 judges should not be permitted to travel outside India.''

The order issued by Justice Karnan on Thursday said, ''The 7 judges as mentioned above are not permitted to move any court against this court's order since the first accused, namely the CJI, is controlling all courts in India. However, this court permits all the erring judges to approach Parliament in order to challenge my order (the court order) if they are not satisfied.''

On his letter to the Prime Minister on 23 January levelling corruption charges against certain judges, Justice Karnan said the complaint was pending inquiry.

''While the complaint is pending before the Prime Minister, how have these seven judges taken personal interest and issued suo motu contempt proceedings against me? The 20 judges are not coming forward and taking any legal action against me,'' he said.