Two days after the income tax department raided Tamil Nadu health minister Vijayabaskar and reportedly seized evidence of bribing of voters, the Election Commission late on Sunday decided to cancel the by-election to the R K Nagar constituency, scheduled for 12 April. It attributed its decision to rampant voter bribing and corruption. 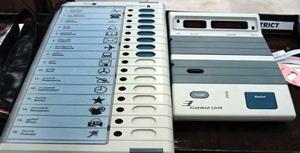 The by-election to fill the vacancy in R K Nagar "shall be held by the commission in due course when the vitiating effect created by the distribution of money and gift items to lure the electors gets removed with the passage of time, and the atmosphere in the constituency becomes conducive to the holding of free and fair election," said a 29-page statement signed by Chief Election Commissioner Nasim Zaidi and Election Commissioners A K Joti and O P Rawat.

The EC's decision came after day-long deliberations in New Delhi. Tamil Nadu chief electoral officer Rajesh Lakhoni had been summoned to submit a report, as was the new-appointed special electoral officer Vikram Batea.

The EC's sudden decision came two days after I-T officials launched raids at the residence and several premises of Vijayabaskar across Tamil Nadu. I-T officials told media representatives on Friday that the raids helped uncover a major plot to bribe voters. The documents unearthed showed that close to Rs90 crore was to be distributed to voters in R K Nagar constituency by the AIADMK Amma party, which fielded Sasikala's nephew T T V Dhinakaran.

In its elaborate order, the commission said that considering its duty "to conduct free and fair elections and to uphold the purity of election and after taking into account all the facts and circumstances" it is satisfied that R K Nagar poll process has been "seriously vitiated". This was on account of unlawful activities of the candidates and political parties and their workers who bribed the electors and unlawfully induced them by offering money and other gifts of consumable items to woo them in their favour.

In the commission's opinion, allowing the current electoral process to proceed and conducting the poll in the constituency on 12 April as scheduled in such vitiated atmosphere would severely jeopardise the conduct of free and fair election in the constituency, said the statement.

Earlier too, in similar circumstances, the commission had rescinded the 2016 assembly elections to the Aravakurichi and Thanjavur assembly constituencies in Tamil Nadu, the EC noted.

"Before parting with the case, the commission cannot help expressing its anguish over the sordid state of affairs as revealed in the reports of the election expenditure observers, election expenditure monitoring teams, static surveillance teams, flying squad teams, video surveillance teams, as well as the reports of the income tax authorities," the statement said.

The innovative ways which the political parties and their leaders at the top echelons have devised to bypass the law-enforcing authorities and these need to be dealt with, said the EC.

"Some of the states have particularly excelled in innovating more and more subtle ways to circumvent the statutory provisions enacted by parliament to curb the menace of money power in elections," said the commission.

The top leaderships of the parties cannot feign ignorance about such illegal activities being indulged in by the candidates set by their parties, and also the managers appointed by their parties to oversee the election campaigns of their candidates. "If not their express consent, their tacit approval to resort to such undesirable activities on the part of their candidates and electoral managers cannot be wished away. It is high time they exerted their moral influence and legal authority to rein in their erring candidates and electoral managers without loss of time if democracy is to flourish and deepen its roots in our country," it said.