Yogi effect: chicken, mutton, egg dealers down shutters in UP

It's not just buffalo meat, but Uttar Pradesh capital Lucknow is fast heading towards a crisis in non-vegetarian food as the entire chicken, mutton and egg markets have begun shutting down. 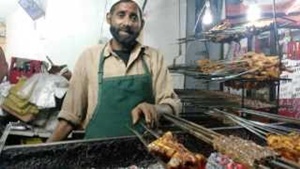 More than 80 per cent markets for non-vegetarian items had already downed shutters on Friday, and various traders' associations have declared strike from today. Reports say this is happening not just in Lucknow but across UP.

Under the circumstances, vegetable prices, which were on the decline for last one week, are likely to register a steep hike.

''The indefinite strike begins tomorrow (Saturday), but most of the shops have shut down today (Friday). We have advised the sellers who have stocks in their shops to sell till tonight and then shut shops from Saturday morning,'' said Md Rizwan Siddiqui, Lucknow Murga Mandi Samiti member.

His shop in Azad Market in Indira Nagar had all its shutters down. All the nearby shops too are closed and the cages to keep the birds were all empty.

Cow slaughter is banned in Uttar Pradesh, which has seen frenetic activity since Yogi Adityanath took charge as chief minister with a vow to crack down on cattle smuggling. One of the Bharatiya Janata Party's election planks was shutting down illegal abattoirs, a move that was seen as hurting Muslim-run businesses.

In the past week, several mutton and fish shops have been set on fire as the supply of buffalo meat – which is legal – has dried up.

Not many shopkeepers are ready to speak their mind or speak at all on the issue. A meat seller that the Hindustan Times tried to speak to at 2.30 pm on Friday was all set to sell off his last five kilos of goat meat and then pack up. He was not ready to say anything or tell his name.

Meat, chicken, and egg sellers are going on strike in solidarity with those whose businesses are getting hit due to the crackdown on buffalo meat sellers and shops that are on streets.

The strike is going to hit hotels' and restaurants' non-vegetarian menu as the supply chain has been snapped.

''Today the truck that replenishes my stock did not turn up,'' said Mohammed Shakeel, who runs his business from Qaiserbagh market in Lucknow and supplies chicken to some of the top hotels and restaurants in Lucknow.

''Buffalo meat is the cheapest meat available. End of its sale will impact demand-supply ratio of chicken, meat, eggs, and vegetables and will lead to steep price escalation of all items. Non-veg food will become out of reach for many regular consumers,'' said a seller of meat.