Manohar Parrikar and his party BJP won the tussle both in the Goa assembly and the Supreme Court and formed government in Goa after the apex court dismissed the Congress' plea to stay the swearing-in of Manohar Parrikar as chief minister, but the Congress is still hoping to defeat Parrikar in tomorrow's floor test. 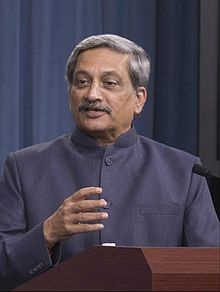 The Supreme Court has directed that the session be convened at 11 am on Thursday and the only agenda of the day should be the floor test, which "shall be held as early as possible" (See: Hung Goa: SC fast-forwards floor test for Parrikar to Thursday).

The Congress, which failed to cash in on its position as the single largest party with 17 seats, is now blaming the BJP which moved swiftly to secure support of local parties.

Congress leader Abhishek Singhvi on Tuesday slammed Manohar Parrikar calling him do din ka sultan (a two-day emperor). ''So if you want to be a do din ka sultan then you are welcome to do so. He is the chief minister for two days beginning this evening. This swearing in is a ministerial act, it is of no constitutional significance. Will be nullified in a floor test in 48 hours,'' Singhvi said

Singhvi was reacting to the Supreme Court's order of conducting a floor test on Thursday giving two days to prove the majority.

The apex court had also paved the way for oath taking ceremony of Manohar Parrikkar this evening.

Singhvi, alleged that the BJP was indulging in horse-trading and violating the established constitutional practices. He asserted that the Congress was not even consulted once on the formation of next government in the state.

The apex court bench, headed by Chief Justice of India (CJI) JS Khehar, however, observed that numbers should determine the single largest party in the state. The apex court further told the Congress that it should have gone to Goa governor instead of approaching the court.

The BJP, which won 13 seats in the 40-member Goa Assembly, managed to garner support from other parties and independents to attain majority of 21 members supporting Parrikar.

Manohar Parrikar, who quit as defence minister and was sworn in as chief minister of Goa to head a coalition government of local allies and Independents on Tuesday, now claims support of 23 members and is sure to win Thursday's floor test.

The two BJP MLAs who were sworn in are outgoing deputy chief minister Francis D'Souza and Pandurang Madkaikar.

The Congress alleges that the governor did not invite it to form government in the state despite the party giving her a letter on Sunday seeking appointment to stake the claim.

According to AICC general secretary Digvijay Singh, the governor did not invite Congress or give it an appointment.

Meanwhile, the Goa Congress led by Congress Legislature Party leader Chandrakant Kavlekar also on Tuesday called on the governor with all its 17 MLAs to seek an opportunity to prove majority in the assembly, but could not get any assurance from her.

"We requested the governor that the Congress be given an opportunity to form the government. Allowing Parrikar to be sworn in is against the Constitution. We have majority on our side," Goa Congress chief Luizinho Faleiro told reporters outside Raj Bhavan. "The governor told us that she would take a decision as per her wisdom," he said.