The Supreme Court has taken up for hearing of an urgent petition filed by the Congress party against Bhartiya Janta Party forming a government in Goa. 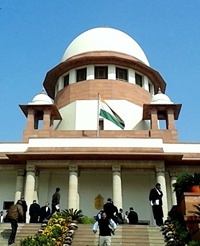 The Congress on Monday moved the SC challenging Goa governor Mridula Sinha's decision to appoint BJP leader Manohar Parrikar as the chief minister of the state (See: Parrikar returns to Goa, Jaitley gets back defence portfolio).

The hurriedly filed petition late in the evening was mentioned at the residence of Chief Justice J S Kehar, who agreed to give an urgent hearing on Tuesday morning.

The apex court, which is on a Holi break for a week, also constituted a special bench to hear the petition on the day set for government formation in the state.

The petition, filed by advocate Devdutt Kamath, has made the centre and Goa governor as the parties.

According to the petition, Congress has emerged as the single-largest party in the polls and under the constitutional convention, the governor was bound to invite the single largest party to form the government and give it the opportunity to prove majority in the floor test.

It said the decision of the governor is a blatantly unconstitutional, illegal, arbitrary and 'violative of the basic features of the Constitution'.

He added that the decision was hastily taken by the governor on Sunday.

Further, the advocate said it was wrong on the part of the governor to invite the BJP-led alliance for government formation as there was no pre-poll alliance.

Parrikar had on Sunday submitted evidence before Governor, the support of 13 MLAs of the BJP, 3 MLAs of the MGP, 3 of the Goa Forward Party and two Independent MLAs thus having a total strength of 21 MLAs in the 40-member assembly.