Pandemonium broke out in Tamil Nadu assembly on Saturday as the newly-sworn chief minister Edappadi K Palanisamy called a special session to seek a trust vote ahead of the 15-day period given for the key floor test of confidence. 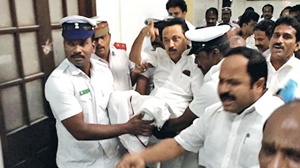 Soon after the house assembled, Palaniswami moved a motion seeking a vote of confidence. Minister KA Sengottayan was appointed as the floor leader of the Tamil Nadu assembly to monitor and manage the floor test proceedings.

AIADMK has 134 MLAs in the 234-member legislative assembly and Palaniswami, who claims to have support of 123 MLAs, is seeking the confidence vote as directed by governor Vidyasagar Rao.

Though the new government was given 15 days' time to prove majority in the House, Palaniswami, a known loyalist of AIADMK general secretary VK Sasikala Natarajan, opted to do it within two days, lest the MLAs change their minds.

As the session began in the morning, DMK leader MK Stalin questioned the haste in conducting the trust vote as the Sasaikala faction decided to seek mandate from MLAs just as they were released from the hotel they were being accommodated for more than a week.

He also emphasised that the will of the people and not that of factions outside political sphere should prevail.

"Democracy will be fulfilled, when secret ballot voting is done. Floor test should be done on another day. Why the hurry when the governor has given 15 days' time?" Stalin asked.

Stalin also accused the officials of meting out 'prisoner-like' treatment to elected representatives of the people. "MLAs are being brought to the secretariat like prisoners," he said.

The Speaker P Dhanapal walked out of the Assembly and the House was adjourned till 3 pm amid violence by DMK MLAs. Legislators tore papers, broke chairs and pulled off microphones after the Speaker rejected their demand of secret ballot in trust vote.

Police tightened security outside Tamil Nadu assembly during the trust vote to avoid the chaos from spilling over to the streets.

Mediapersons were seen arguing with the police outside the assembly, following which the audio speaker in the press room was disconnected.

Earlier, AIADMK Presidium Chairman Madhusudanan, who belongs to the Panneerselvam camp, had appointed S Semmalai as chief whip in the assembly.

Ahead of the crucial 'floor test', Panneerselvam appealed to AIADMK MLAs to vote against Palanisamy.

With today's developments and future uncertainty, the political stalemate in the state looks far from getting resolved.