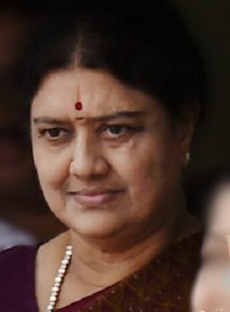 Sasikala, who has never held any party post nor contested an election has been chosen as the new AIADMK legislature party leader, and will soon be chief minister.

Opposition Dravida Munnetra Kazhagam (DMK) condemned the move with its leader M K Stalin commenting that the people of Tamil Nadu voted for AIADMK and J Jayalilatah and "not for the late chief ministry's housemaid".

A month after Jayalalithaa's death, acting chief minister O Panneerselvam resigned to make way for the elevation of Sasikala as the new chief minister and leader of AIADMK.

He also cleared the chief minister's office and party hierarchy of leaders who were close to the late Jayalalitha and replaced them with Shasikala supporters.

For VK Sasikala, it is a remarkable rise and even before an oath-taking ceremony, her name and image is prominent on the Twitter page of the chief minister's office.

The Twitter page changed just minutes after stand-by chief minister proposing Shashikala as the new leader of the party and AIADMK lawmakers elected Sasikala as their chief, setting the stage for her takeover as chief minister.

Sources say the oath ceremony may be held on Thursday; 9 February is believed to be an auspicious date.

It will depend on the schedule of governor C Vidyasagar Rao, who is in Delhi for the wedding of a union minister's son. His absence from Tamil Nadu at this time has driven speculation that the centre - the governor reports to the home ministry - is not happy at the AIADMK's decision to elevate Sasikala.

A 61-year-old former video cassette seller, Sasikala faces more than a few challenges as she prepares to rule one of India's most politically vital states.

Within six months after taking over, she has to be elected from an assembly seat.

During that period, she faces the Supreme Court verdict on a disproportionate wealth case.

Party leaders argue that Sasikala was acquitted in the case along with Jayalalithaa, but an appeal against it is before the top court.