Prime Minister Narendra Modi, in Lucknow on Monday, took pot shots at the fresh bout of infighting within the ruling Samajwadi Party, wondering how a party embroiled in ''saving [a] family'' could salvage the fate of the state.'' He, however, did not go into specifics or refer to the coup in the party by the faction led by Akhilesh Yadav. 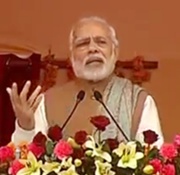 ''Will they save UP?'' the Prime Minister asked a massive crowd at the Rambai grounds addressing a maha parivartan rally. The spacious maidan has traditionally been a hunting ground of Bahujan Samaj Party chief Mayawati who is often billed as the only leader capable of filling the ground to capacity.

Taking a dig at the major parties in the state due for elections later this year, Modi said, ''If a party was for the last 15 years unsuccessfully trying to establish the ''son,'' another one was busy safeguarding its money in banks.'' The third party, Modi said, was embroiled in ''saving a family.''

Just before Modi spoke, home minister Rajnath Singh also took a dig at the infighting within the SP.

''Only the Bharatiya Janata Party can and wants to save the state,'' Modi told the crowd, claiming that there had been no development in Uttar Pradesh since BJP lost power more than a decade ago. Referring to the period of 14 years BJP was out of power in UP, Modi stressed it was not a vanvaas (exile) of his party but that of the development in the state. ''That 14 year exile will end,'' Modi vowed, as he sought a full majority government for his party in 2017.

''The parivartan (change) needs to be total, like the mandate he secured at the Centre in 2014,'' he stressed.

''Do not leave anything incomplete in Uttar Pradesh. There must be no obstacles in changing the fate of UP. The entire force in Delhi is with you,'' the prime minister said. He said his was the only government in the last three decades which had only one ''high command'', the people.

Targeting the ruling party for the poor law and order and 'goondaism' in the state, Modi said, ''Give us a chance and we promise to give you a life of peace and happiness.''

In his first rally in Uttar Pradesh after 50 days of demonetisation, Modi said the issue had united even the staunchest of political opponents. Referring to the SP and BSP, he said both were raising the same slogans, '''Modi ko badlo, Modi ko hatao'' (Change Modi, remove Modi). ''I am talking about fighting corruption and black money. You have to decide, brothers and sisters. They say Modi hatao (remove Modi), I say remove black money and corruption. The people of the country need to decide,'' the Prime Minister said.

Referring to the criticism of schemes and announcements for the poor, farmers and pregnant women he made in his address to the nation on 31 December, Modi said his opponents had a problem with everything he did. ''If Modi takes away their money, they are worried. If Modi gives it to the poor, they are still worried.''

Modi said that his opponents were becoming ''irrelevant'' though their opposition to him and that they were rattled. ''Their chairs are shaking. The nation has figured them out,'' Modi said as he vowed that the ''fight against corruption and black money will not stop''.

Modi also took a dig at the SP government alleging it was thwarting development work suggested by other party MPs. Modi said he experienced this in his own Lok Sabha constituency Varanasi where roads are not being built. "Who loses? Will you continue playing this game?"

Had the state government properly utilised the funds sent by centre, Uttar Pradesh would have developed at a much faster pace, he said. ''But development is not their intention,'' Modi said.

Modi began his speech by referring to the strength of the crowd gathered at the venue and hailed Lucknow as the karmabhoomi of former prime minister and MP from the seat, Atal Bihari Vajpayee. He said he had never witnessed such a large gathering. Those political pundits analysing which way the UP election will go, will not have to work too hard in predicting the results of the UP elections when they see this crowd. The way the wind is blowing is clear,'' he said.