Jammu and Kashmir's document of accession made public 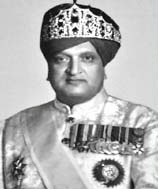 The documents relating to the accession of the princely state of Jammu and Kashmir to India, which had been locked away in government archieves for decades, has finally been placed in the public domain following initiatives taken by an RTI activist.

After months of persuation and legal challenges, RTI campaigner and programme coordinator with the Commonwealth human rights initiative, Venkatesh Nayak, has been able to obtain the documents of accession of 540 princely states, including that of Jammu and Kashmir.

The National Archives has given permission to take copies of the document.

Nayak had also filed an RTI with the home ministry, which finally transferred his petition to the National Archives, which in turn gave him permission to take copies of these documents.

"The accession of J&K is a fact of history known to all of us, but for the first time, citizens can look at the actual document," Nayak said.

The ruler of Jammu and Kashmir, Maharaja Hari Singh, had acceded to India on 26 October 1947, by signing the "instrument of accession" like other princely states.

"I have not seen this document in decades and it brings with it a flood of emotions," NDTV quoted Dr Karan Singh, Rajya Sabha lawmaker, and son of Maharaja Hari Singh, as saying.

Dr Singh is also reported to have recognised the document and the hand writing of his father.

"Invaders from across the border in Pakistan had crossed over into J&K and were about to take over the airport. Had it not been for the bravery of the Maharaja's soldiers, the airport would have fallen, making it impossible to sign the document," Dr Singh told NDTV.

The documents should silence critics from across the border, who had questioned its very existence, Dr Singh added.

Dr Karan Singh told NDTV that he was also present in his home on the day (26 October 1947) when his father, Maharaja Hari Singh, signed the instrument of accession. The document was sent along with a personal letter to Lord Mountbatten, who was the Governor General of India at the time, he said.

"This is an important page from India's history and it is wonderful that it is being preserved in the national archives for the public to see," Dr Singh said.

The documents make it clear that the accession of Jammu Kashmir State to India as one of its states legally and constitutionally final and irrevocable. Accession was not conditional and was on similar grounds as was the case for all the Indian princely states.

The separatists, Huriyats, do not want to accept the accession of the state to India as final for their own political ends. They have been claiming that Kashmir is a disputed issue and as such seeking a remedy by involving a third-party intervention.