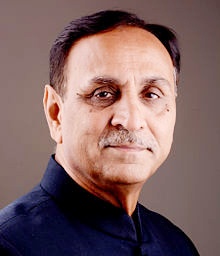 Vijay Rupani will take over as Gujarat's new chief minister from Anandiben Patel who has stepped down, while Nitin Patel will assume charge as the deputy chief minister.

The Bharatiya Janata Party leadership decided to name Rupani as the new CM, although earlier reports had said that health minister Nitin Patel, the senior-most minister in the Anandiben Patel cabinet, would take over as the next chief minister.

His office had also claimed that his name was finalised for the position, although state BJP spokesperson Bharat Pandya told the state party unit on Friday that there was no word from the party's top leadership.

Anandiben Patel, who turns 75 this November, resigned from the position on Wednesday amid protests by Dalits in the state. The resignation sparked speculations that she quit because of political pressure.