Plea against 'triple talaq' may go to Constitution bench

A divorce through 'triple talaq' among the Muslim community is a "very important matter affecting a large section of people" which has to be tested on the "touchstone of the Constitutional framework", the Supreme Court said today while agreeing to examine the issue of personal law. 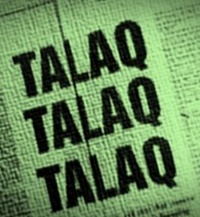 The apex court said "we are not straightaway arriving at any conclusion" as there were "very strong views" on both sides. It said it will also see if there was any error in previous judgements which dealt with the issue and decide whether it can be referred to a larger or a five-judge Constitution bench.

"We are straightaway not jumping to any conclusion. It has to be seen if there is a need for any further consideration of law by the Constitution bench," a bench comprising Chief Justice T S Thakur and Justice A M Khanwilker said while asking the parties to get ready for a debate on the scope of judicial review of judgements on 'triple talaq'.

"Personal law has to be tested on the touchstone of Constitutional framework," it said while stressing that "this is a very important issue affecting a large section of people and there are very strong views from both the sides."

The bench, which posted the matter for further hearing on 6 September said "legal propositions for determination has to be worked out".

During the hearing, senior advocate Indira Jaising referred to an old verdict of the Bombay High Court holding that the personal law regime cannot be subjected to fundamental rights. The bench said, "All can express their views and participate in the debate. We will know what the stand is of all the parties."

Wednesday's hearing saw a total of four petitions against the concept of divorce through 'triple talaq'.  The bench allowed all of them to be impleaded and sought the stand of Centre on the issue within six weeks.

The remarks that all can express their views came after a woman advocate, Farah Faiz, sought restraint on the All India Muslim Personal Law Board (AIMPLB) and others from airing their views on public platforms including TV debates.

"We will not be influenced by TV shows. You can also participate in TV shows. We will keep your application pending. If at any stage we find that they are going out of hand, we will intervene," the bench said.

Counsel appearing for AIMPLB defended the 'triple talaq' practice and said it has been held by courts that matters of personal law could not be tested constitutionally.

The apex court had earlier sought the Centre's response on a plea challenging the constitutional validity of Muslim practices of polygamy, triple talaq (talaq-e-bidat) and 'nikah halala'.

Talaq-e bidat is a Muslim man divorcing his wife by pronouncing more than one talaq in a single tuhr (the period between two menstruations), or in a tuhr after coitus, or pronouncing an irrevocable instantaneous divorce at one go (unilateral triple-talaq).

The court had on 28 March asked the Centre to file before it the report of a committee constituted earlier to look into the aspects of personal laws relating to marriage, divorce and custody prevalent in various religious minorities, including Muslims.

Earlier, a Supreme Court bench had taken suo motu cognizance of the question as to whether Muslim women faced gender discrimination in cases of divorce or due to other marriages of their husband and urged Chief Justice of India to set up a bench to examine the issue. Subsequently, various other petitions were filed challenging the age-old practice of 'triple talaq' in the Muslim community.