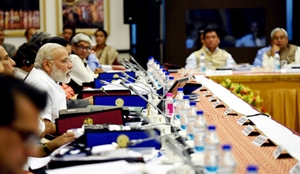 NITI Aayog has submitted to the prime minister's office a roadmap for closure and strategic sale of government stake in some public sector units, including national flag carrier Air India, to help the government hit the divestment target of Rs56,500 crore for this fiscal.

Reports quoting official sources said NITI Aayog has submitted two separate lists of state-run companies, one comprising sick PSUs which may be closed down and the other a list of firms which should be privatised.

"Strategic sale means that the government will bring down its stake to 49 per cent or below in such PSUs," the source added.

Finance minister Arun Jaitley had said in his Budget 2016-17 speech that NITI Aayog will identify PSUs for strategic sale.

NITI Aayog has separately dealt with the issues pertaining sick firms or loss-making units and on divestment, or strategic sale where government wants to reduce its stake.

Government has set a divestment target of Rs56,500 crore for this fiscal. Of this, Rs36,000 crore is to come from sale of residuary stake in PSUs and Rs20,500 crore from strategic sale of some other units.

Government kick-started disinvestment programme for the current fiscal with sale of a 11.36 per cent stake in NHPC, raising Rs2,700 crore in the process.

It has lined up as many as 15 PSUs, including Coal India, NMDC, MOIL, MMTC, National Fertilisers, NALCO and Bharat Electronics, for stake sale in current fiscal.

Meanwhile, central trade unions representing 28 PSUs, including the RSS-backed BMS, have threatened to go on strike against NITI Aayog's proposal to privatise Air India and shut 28 PSUs, and sought Prime Minister's intervention in this matter.

One of the bodies has even accused the government of "moving on expected lines to sell the country".

"BMS opposes NITI Aayog proposal to close sick PSUs... BMS demands that the government call a meeting of all stakeholders to discuss the revival plan of sick PSUs before proceeding to decide on the proposal of NITI Aayog. Otherwise, we will compel to come on to the street to oppose the move," BMS General Secretary Virjesh Upadhyay said in a statement today.

The statement follows NITI Aayog submitting its proposal to the PMO on strategic sale, privatisation of PSUs and closure of loss-making units. The NITI panel, headed by vice-chairman Arvind Panagariya with CEO Amitabh Kant and other members on board, has prepared a detailed blueprint on PSU reforms. The Aayog has already submitted two lists of PSUs for strategic sale and closure or sale of sick units.

Although the panels' recommendation has not been made public, some media reports suggest that it has pitched for reducing the government's stake to 49 percent or below in PSUs at one go under the strategic sale option.

"AITUC has also condemned Aayog's proposal to wind up 28 PSUs and long-term lease of ITDC hotels. AITUC appeals to the Prime Minister not to accept the proposals as submitted by NITI Aayog on strategic sale and winding up the so-called loss making PSUs and stresses on revival of these units."

Centre of Indian Trade Unions General Secretary Tapen Sen was more blunt: "We are opposed to it. The government is moving on expected lines to sell the country".

Sen said further, "What is surprising is that now the government wants to sell those PSUs on which crores were spent for revival. This will definitely be one of major issues at the nation-wide Bharat Bandh on September 2, 2016."