Finance minister Arun Jaitley has rejected opposition Congress party's demand to statutorily fix a ceiling for the proposed goods and services tax (GST) even as most states agreed to the need for a uniform tax rate across the country. 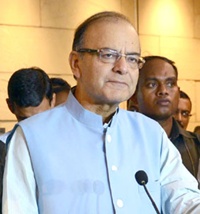 Speaking after a meeting of state finance ministers, Jaitley said there was also a consensus among states against the Congress party's demand for a cap on GST rate.

States have arrived at a "broad consensus" with Tamil Nadu expressing "some reservations". Tamil Nadu's reservations have been submitted to the GST committee and the Empowered Committee of State Finance Ministers on GST will look into the matter, he said.

Jaitley said a constitutional amendment will be provided, where revenue loss of states, if any, will be compensated for a period of five years.

This was a long standing demand of the Mamata Banerjee-led Trinamool Congress.

"Virtually every state has supported the GST," Jaitley told reporters.

On the implementation of 1 per cent inter-state levy, the finance minister said: "I have said this earlier and I repeat, I am flexible on the issue."

Jaitley said he would push for the Constitutional amendment of the GST bill in the Rajya Sabha in the monsoon session of Parliament.

"Hopefully that in monsoon session (passage of the bill)," he said, adding that there was no deadline still on implementation of GST.

The roadmap for GST implementation would include first a Constitutional amendment; ratification of state GST by all legislative assemblies and passage of GST.

"All supporting infra are in place," he said.

The proposed tax reform, India's biggest since independence in 1947, seeks to replace a slew of federal and state levies, transforming the nation of 1.3 billion people into a single market.

The Congress party, which initiated the tax reform, now wants the BJP-led government to cap the tax rate at 18 per cent and create an independent mechanism to resolve disputes on revenue sharing between states if it is to back the GST bill.