13 new faces sworn in along with Jayalalithaa in TN

Thousands of supporters lined her route as J Jayalalithaa, chief of the AIADMK, accompanied by an impressive convoy, headed to the venue in Chennai where she was sworn in as chief minister after a historic victory last week. Her supporters cheered, danced and showered her car with rose petals. 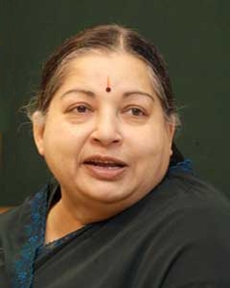 After Jayalaithaa took the oath of office, 28 ministers -13 of them new faces - were also sworn in, in groups. Among those who accepted her invitation to attend the ceremony was M K Stalin of the main opposition political party, the Dravida Munnetra Kazhagam.

The oath ceremony, marking Jayalalithaa's sixth innings as CM, was held at the Madras University Centenary Auditorium in Chennai. She made history last week by winning a second consecutive term in a state that had alternately voted her party and arch rival DMK to power for three decades.

O Paneerselvam, a Jayalalithaa loyalist and the man who served as chief minister in the months that the AIADMK chief was in jail on corruption charges, will reportedly continue to be the state's finance minister. Jayalalithaa, 68, will retain important portfolios like police, home and general administration.

On Monday last, Tamil Nadu returned Jayalalithaa to power, but with a narrower margin than five years ago. Her AIADMK has won 134 of the state's 234 seats, while the DMK, which was virtually wiped out in 2011, has managed to win 89 seats. Its pre-poll partner the Congress has won eight.

The DMK's 93-year-old chief M Karunanidhi has pointed out that the difference between the vote share of his coalition and the AIADMK is only a little over one per cent - 41.6 for Jayalalithaa's party and 40.2 for DMK plus - and has delivered a warning by saying that a much more muscular DMK will function as a "constructive opposition" in the state assembly.

Jayalalithaa had two years ago also swept the national election in Tamil Nadu winning 37 of the state's 40 seats and her AIADMK is the third largest party in the Lok Sabha after the ruling BJP and the Congress. The BJP-led Narendra Modi government counts on the support of the AIADMK to push legislation through, especially in the Rajya Sabha or upper house where it is in a minority.