Assam went the BJP way as West Bengal and Tamil Nadu retained favourites TMC leader Mamata Banerjee, AIADMK chief Jayalalithaa, respectively in power, while Kerala switched to the Left and the Congress-DMK alliance won the race for the 30-member assembly in Puducherry, as final results of assembly elections were released by evening today. 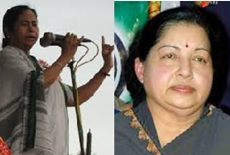 More than any wins of any single party, the assembly polls were a pointer to the rout of the country's grand old party, the Indian National Congress and the depths to which it has fallen.

The results show the Congress is a liability for any party entering into an alliance with it as the allies also went down with the Congress.

With Assam also dumping the Congress, Narenra Modi's BJP looked closer to its vision of a Congress-less India, but the party will find it more difficult to deal with regional outfits than the Congress.

In Assam, the Bharatiya Janata Party (BJP) alliance won the elections with a comfortable tally of 86 seats while the ruling Congress managed to retain 26 and the All India United Democratic Front (AIUDF) won 14.

BJP's chief ministerial candidate Sarbananda Sonowal won from Majuli assembly constituency while the party on its own secured 60 of the 126 seats.

The Congress has emerged as the second largest party in the state with a lead in 44 seats and the CPI (M) barely managed to secure 26 seats.

The CPI won one, Forward Bloc two and the RSP three seats in the assembly elections.

The BJP and its ally, the Gorkha Janmukti Morcha (GJM) have secured three seats each.

Jayalalithaa's arch rival and DMK president M Karunanidhi won from Tiruvarur, while the other chief ministerial candidates lost the race.

AIADMK chief J Jayalalithaa also proved pollsters wrong with a stunning performance in the Tamil Nadu Assembly Elections 2016, also becoming the first incumbent chief minister to secure a second term for her party in the last 30 years after her predecessor MGR.

In Keral, thw CPI (M)-led Left Democratic front (LDF) put up an impressive performance in the assembly polls winning 91 seats, while the ruling United Democratic Front (UDF) could manage only 46.

However, the BJP, which made its first major attempt to usurp power ousting the two fronts, failed miserably with only senior BJP leader O Rajagopal winning from Nemom in Thiruvananthapuram.

Both current and former chief minister of Kerala - Oommen Chandy and Achuthanandan – won their respective seats. With only a few UDF ministers losing the elections, there was no visible anti-incumbancy wave in the state where the ruling party was steeped in allegations of corruption.