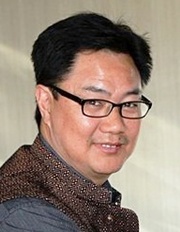 Rejecting Pakistan's objection to a draft bill on India's depiction on maps, Union Minister Kiren Rijiju on Tuesday said it was the duty of the government to ensure that India's geography is projected properly.

"We don't take cognisance to Pakistan's objection to the draft bill. We will take suggestions and views of citizens, experts and various stakeholders before its finalisation. But it is the duty of the government that India's map is depicted properly," he told reporters in Delhi.

Rijiju's comments came after Pakistan said it has expressed "serious concern" to the United Nations over a draft bill over the map of Kashmir and called upon the world body to uphold its resolutions and urge India to stop such acts which are in "violation of international law".

The minister of state for home said the 'Geospatial Information Regulation Bill 2016' is still in conceptual stage and the Union Cabinet will discuss it before taking the approval of the Parliament.

As per the draft legislation, wrong depiction of the map of India could land the violators in jail with a maximum term of seven years and fine up to Rs100 crore.

It will be mandatory to take permission from a government authority before acquiring, disseminating, publishing or distributing any geospatial information of India.

The action has been envisaged by the government against the backdrop of instances where certain social networking sites showed Jammu and Kashmir and Arunachal Pradesh as part of Pakistan and China respectively.