In what is seen as a serious watering-down of the 2008 Malegaon blasts case, the National Investigation Agency (NIA) has dropped the name of key accused Sadhvi Pragya Singh Thakur and five others as accused in its charge-sheet filed in a Mumbai court today. This sets the stage for their early release from jail. 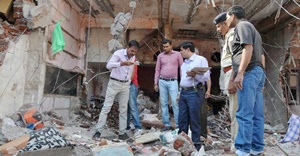 However, eight other accused, including Lt Colonel Prasad Srikant Purohit, will continue to be prosecuted for their role in the 29 September 2008 terror bombing that claimed at least seven lives in the Muslim majority town of Maharashtra's Nashik district.

The NIA in its supplementary charge-sheet filed before the special court decided to drop terror charges under the Maharashtra Control of Organised Crime Act (MCOCA) against all the accused, an official said. Confessions made before a police officer are admissible in a court under the dreaded law.

Those who remain accused will now be prosecuted under the less stringent Unlawful Activities (Prevention) Act, or UAPA, for their role in the bombing that had brought to fore the so-called "right-wing terror" in India. Most of the accused in such terror cases were linked to Hindutva groups, including the Rashtriya Jagran Manch and Abhinav Bharat.

"During investigations, sufficient evidences have not been found against (the accused) and the NIA has submitted in the final report that the prosecution against them is not maintainable," the NIA said, after public prosecutor Geeta Godambe filed the charge sheet in the court of Special Judge S D Tekale.

The premier terror probe agency said no offence was established under the MCOCA in this case against anybody, and the NIA made it clear that it did not rely on the confessions recorded by the Mumbai Anti-Terror Squad (ATS).

The Sadhvi's lawyer Sanjiv Punalekar told IANS that the NIA had decided to drop charges against his client due to lack evidence.

"The charges against the six accused have been dropped while the charge sheet is being filed against the other remaining accused," Punalekar said.

The six accused are likely to be released from prisons soon, he told reporters.

The Malegaon blast was the first terror case involving the hitherto unknown "Hindu extremists" and was initially investigated by police and later by the ATS led by its chief Hemant Karkare, who was killed in the 26-28 November 2008 Mumbai terror attacks.

In April 2011, the case went to the NIA, which was formed in 2009, months after the Mumbai carnage. The NIA earlier had maintained the list of 14 accused named by the ATS. Two more - Ramchandra Kalsangra and Sadeep Dange - had been declared absconding.

The NIA took charge of the Malegaon case in view of its nationwide ramifications and because of the involvement of accused who were also wanted in other terror cases in different parts of the country.

The Malegaon blast case probe had riled the Bharatiya Janata Party (BJP) and other right-wing groups, which accused the then Congress-led government of giving a religious colour to terrorism by going after Hindutva activists without any evidence against them.

On Friday when the charges against the main accused were dropped, the Congress' Digvijaya Singh hit out at the NIA and the BJP-led government for safeguarding "terrorists". He also lashed out at the NIA for invalidating Hemant Karkare's probe.

"They are saying that Karkare filed a wrong report. We know you want to safeguard them (the accused) and we also know you have links with those who are involved in terror activities. They should at least spare a martyr," Digvijay Singh said.

But the government denied there was any political interference in probe.

Union Minister of State for Home Affairs Kiren Rijiju said, "The law is taking its natural course. The investigators now have the freedom to investigate without pressure unlike during the previous regime."