The Supreme Court on Friday dismissed a batch of petitions challenging the Constitutional validity of Sections 499 and 500 of the Indian Penal Code (IPC) that provide for a two-year jail term for criminal defamation. 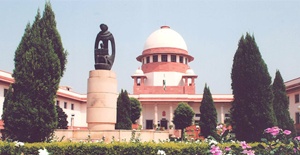 They had contended that Sections 499 and 500 of the IPC, which prescribe a maximum sentence of two years' imprisonment for defamation, were outdated and inconsistent with the citizens' right to freedom of speech and expression guaranteed under Article 19(1)(a) of the Constitution.

A bench of Justices Dipak Misra and Prafulla C Pant allowed Gandhi, Swamy and Kejriwal to move the high court for quashing First Information Reports (FIRs) against them.

Upholding the constitutional validity of Section 499 and Section 500 of the IPC, the bench rejected the argument that the criminal defamation law had a ''chilling effect on freedom of speech''.

The apex court said, ''Mutual respect to each other is required to maintain the Constitutional values that ensure the dignity of any individual.''

''It is not necessary for all in the chorus to sing the same song,'' Justice Misra said, pronouncing the judgment.

The SC had a word of caution for trial courts dealing with criminal defamation cases.

''A magistrate should be extremely careful in issuing summons on a plea for the initiation of any criminal defamation case,'' it said.

The bench had reserved its verdict on the issue in August 2015 after hearing the matter for 18 days.

Earlier, the NDA government strongly defended the criminal defamation law and pitched for their retention in the statute book, stating that they have stood the test of time.