On way to the airport, but left your passport behind? Relax as De La Rue, a Britain-based commercial banknote printer and passport manufacturer, is working on a technology that can store "paperless passports" in smartphones. 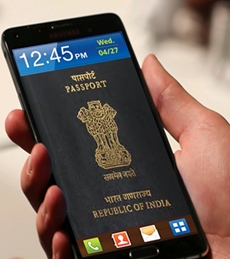 De La Rue, the world's biggest passport producer and the company that prints British banknotes, is working on technology that could store passports within mobile phones, allowing travellers to do without the burgundy booklets that have been around for hundreds of years.

The ''paperless passports'' could act in a similar way to mobile boarding cards, which can now be stored on a smartphone, allowing a tourist to travel through an airport without documents of any kind.

However, the potential for forgery, the international barriers and the distinct possibility of losing one's phone mean the security challenges present big hurdles. The technology would also have to be implemented across borders.

''Technology is at the forefront of De La Rue's business, and as you would expect we are always looking at new innovations and technology solutions for our customers around the world,'' a spokesman said. ''Paperless passports are one of many initiatives that we are currently looking at, but at the moment it is a concept that is at the very early stages of development.''

Modern passports already have chips in them that compare the carrier's face to the one stored in the passport, so one that sits inside a smartphone could embed this technology instead of merely representing the document on a screen.

''Digital passports on your phone will require new hardware on the device in order to securely store the electronic passport so it cannot be copied from the phone. It will also have to be communicated wirelessly to passport readers, because doing it onscreen like an airline ticket QR code can be copied or spoofed,'' said David Jevans of security company Proofpoint.

De La Rue chief executive Martin Sutherland told The Times of London that it was already testing the concept of paperless passports.