The Election Commission today announced that assembly elections in West Bengal, Kerala, Assam, Tamil Nadu and Puducherry, consisting of 824 assembly constituencies and around 170 million voters, will be conducted between 4 April and 16 May. 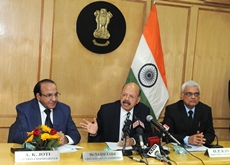 ''Elections will be held in 824 assembly constituencies in the 5 states.?The counting day for all 5 states is May 19,'' chief election commissioner Nasim Zaidi said during a press conference.

The terms of these five assemblies will end in April and May.

The Model Code of Conduct will be enforced with immediate effect and the governments of the poll-bound states as well as the centre would not be able to announce any new schemes or programmes that may influence the voters.

Counting of votes in all 5 states will be on 19 May.

Polling in Puducherry, Tamil Nadu, Kerala will be held in a single phase on 16 May while election in West Bengal will be held in 6 phases and?Assam elections in 2 phases on 4 April and 11 April.

As far as possible, in WB and Assam, all polling locations to be monitored by Central Police Forces, EC said while addressing the media.

The  EC claims to have revised the electoral rolls   of   all   the existing assembly constituencies in the four states - Assam, Kerala, Tamil Nadu and West Bengal and the union territory of  Puducherry, as of the qualifying date of 1 January 2016, which have since been published.

For the first time, the EC has provided a new symbol for the NOTA (none of the above candidates) option, which was designed by National Institute of Design (NID). This new symbol will facilitate the voters in casting of their votes.

There will now be `NOTA' on the balloting unit (the EVM) below the name of the last candidate, so that electors who do not want to vote for any of the candidates can exercise their option by pressing the button.

As per the established practice, the EC holds the elections to the legislative assemblies of the states whose terms expire around the same time, together.

By virtue of its powers, duties and functions under Article 324 read with Article 172(1) of the Constitution of India and section 15 of Representation of the People Act, 1951, the Commission is required to hold elections to constitute the new Legislative Assemblies in the States of Assam, Kerala, Tamil Nadu, West Bengal and Puducherry before expiry of their present terms.

Photo electoral cards will be used during the elections in all states, although only 97.90 per cent of voters in Assam will be able to use the facility. In any case identification of the voters at the polling booth at the time of poll will be mandatory.

Electors who have been provided with EPIC will be identified through EPIC.