The JNU row continued to reverberate in Parliament today as Communist Party of India (Marxist) leader Sitaram Yechury made a powerful speech against the government, asking it if dissent is considered sedition. 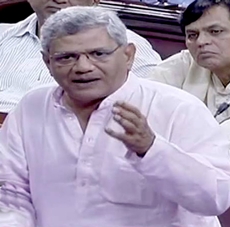 A day after Human Resource Development Minister Smriti Irani forcefully defended the government in Parliament over the sedition charges against Jawaharlal Nehru University (JNU) students' union leaders Kanhaiya Kumar, Umar Khalid and others, Yechury said that ''suppressing dissent is not Indian democracy or part of the Indian Constitution; we are responsible for the country''.

He said the situation has come to such a pass that the entire JNU is being termed as ''anti-national''.

Taking a dig at the government, he said the murderer of Mahatma Gandhi, Nathuram Godse ''is for the government a national hero and Sitaram Yechury is anti-national''.

''Don't teach us patriotism,'' he said to the government.

Yechury said what happened in JNU and in Hyderabad University, where Dalit student Rohith Vemula committed suicide, ''is happening across India''. He said what the government did in the Rohith's case was ''partisan intervention''.

Union Finance Minister Arun Jaitley retorted that the debate about the JNU row in Parliament ''is about facts and not abstracts''.

Yechury accused the government of charging the students with sedition because it couldn't tolerate dissent and wanted to enforce its ideology on everybody.

''What happened in JNU is not matter restricted to only one university. You have seen what happened in Pune, Allahabad, Jadavpur, various places,'' Yechury said, participating in the ongoing debate in the Rajya Sabha on unrest in universities.

''The national flag in our hearts is much higher than 207 feet. We do not need any certificate on patriotism. The tricolour in our hearts is much larger than all national flags put together,'' said Yechury in the Rajya Sabha, which was debating the suicide of Dalit scholar Rohith Vemula at University of Hyderabad and students at Delhi's Jawaharlal Nehru University being charged with sedition.

''What happened in JNU, in Hyderabad University is happening across India - what the government did in Rohith case was partisan intervention,'' he alleged.

''Mahatma Gandhi went to jail under the sedition act; Bhagat Singh was martyred. You are using it (sedition law) against your students,'' he alleged.

''You will see an effort in the field of education and higher education in general of what I would describe as an effort to replace Indian history with mythology, to replace the rich philosophy by Hindu theology. This is the larger project at work,'' Yechury said.

''This is the project the government is patronising. The project of metamorphosing India's secular democratic republic into what they call a Hindu Rashtra. This is an attack on Indian Constitution,'' said the CPI (M) leader.

On Wednesday, HRD Minister Smriti Irani targeted the Congress and the Left after a debate on Vemula's suicide and the JNU sedition row in the Lok Sabha.

Irani defended the action against JNU students, saying students' union president Kanhaiya Kumar and others had been found indulging in anti-national activities by the university authorities.

She also made an emotional pitch over Vemula's suicide, insisting that her ministry had no role in his death and the deceased himself had said in his suicide note that nobody should be held responsible for his action.