Taking the diplomatic world by surprise, Prime Minister Narendra Modi made an unscheduled stopover in Islamabad on his way back from Afghanistan, to greet his Pakistan counterpart Nawaz Sharif on his birthday, when the two leaders chatted for over two hours. 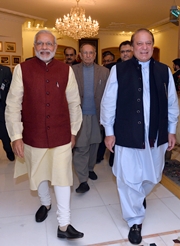 ''Spoke to PM Nawaz Sharif & wished him on his birthday," Modi tweeted.

"Looking forward to meeting PM Nawaz Sharif in Lahore today afternoon, where I will drop by on my way back to Delhi," came his second tweet.

Modi was in Kabul then. But at the end of the two-and-a-half hours in Pakistan, the two sides had given trust a big push. The two leaders agreed to increase people-to-people contact and take talks forward.

The prime minister's choice of the day for the visit was also significant. It was not only Christmas Day, Sharif's birthday as well. It was also the Rasm-e-Heena (a wedding ceremony) of Sharif's granddaughter Mehr ul Nisa.

In fact, Modi was recreating what former Prime Minister Atal Behari Vajpayee, also of Modi's Bharatiya Janata Party, did in 1999 on his birthday.

The surprise move even caught Modi's own party, the BJP, off-guard. Its leaders, however, characterised it as one of PM's "pleasant surprises".

Though official sources in Delhi said that the PM himself took this "instantaneous" decision, the sequence of events over the past one week, makes one believe that a window was being explored behind-the-scenes for this visit.

Pakistan's high commissioner in India Abdul Basit had left for Islamabad on Tuesday. Also, the presence of an Indian industrialist in Lahore, who had arranged a one-to-one meeting between Modi and Sharif on the sidelines of the SAARC summit in Kathmandu last year, to attend Sharif's birthday as well as the wedding of his granddaughter, doesn't seem a coincidence.

After the meeting, Pakistani foreign secretary Aizaz Chaudhry said, "The Modi-Sharif meeting was held in a very cordial atmosphere ... it has been decided that there will be greater interaction, people-to-people contact, and an environment of goodwill will be created."

Pakistani channels reported that both the prime ministers were in a casual mood during the 'chai pe charcha', which included vegetables, kheer and special Kashmiri salt tea. Sharif later saw off Modi at the airport.

Chaudhry said that during the brief meeting, the two PMs decided that as part of a comprehensive dialogue, the foreign secretaries of the two countries will meet in mid-January.

Attempting to dispel the notion that the visit was pre-planned, Chaudhry said that the Pakistani PM's adviser on foreign affairs Sartaj Aziz and National Security Adviser Nasir Janjua too would have attended the meeting if the Indian PM had informed about his visit earlier.

He added that the two sides decided to collectively work towards the common goal of fighting poverty and to open new avenues for peace and mutual cooperation between the two neighbouring countries.

Special security arrangements were put in place in and around Lahore. Flights were diverted or grounded, hours before the Indian Air Force plane hit the tarmac of the Alama Iqbal Airport, Lahore. Modi had left for Moscow in Air India One, meant for the PM's foreign travels, he arrived in Kabul and Lahore in an Indian Air Force plane which was escorted by a decoy plane and was also laced with defence systems.

Modi is scheduled to visit Pakistan once again, in September 2016, to attend the SAARC summit.