Taking a major step forward in improving frosty bilateral ties, India and Pakistan on Wednesday decided to resume high-level bilateral talks and announced that the same would now be called 'Comprehensive Bilateral Dialogue', a change of terminology from the earlier 'Composite Dialogue'. 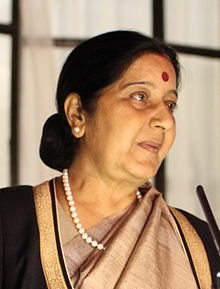 Briefing the press after meeting Pakistan's foreign affairs adviser Sartaj Aziz – her peer in the Pakistani government – external affairs minister Sushma Swaraj said the dialogue will include peace and security and Jammu and Kashmir.

Swaraj had earlier in the day met Pakistan's Prime Minister Nawaz Sharif. She was in Islamabad to attend the multinational 'Heart of Asia' conference on Afghanistan.

Today's announcement caps a series of positive developments since Prime Minister Narendra Modi met his Pakistani counterpart Nawaz Sharif in Paris 10 days ago on the sidelines of a climate summit.

The Indian minister announced today that the foreign secretaries of two countries will meet to decide the modalities and schedule of the Comprehensive Bilateral Dialogue.

A joint statement issued afterwards said Pakistan has assured India of "steps being taken to expedite the early conclusion" of the 26/11 Mumbai attacks trial, something that India has been pressing for long.

This development could be a breakthrough in improving bilateral ties as both the countries have decided to mutually address issues like counterterrorism, Jammu and Kashmir, narcotics control, humanitarian issues, people to people exchanges and religious tourism.

The National Security Advisors (NSAs) of India and Pakistan who had recently met in Bangkok, will continue to address all issues connected to terrorism, according to a joint statement issued by the two countries.

The joint statement came after Swaraj met Sharif and later his advisor on foreign affairs Sartaj Aziz on the concluding day of her two-day visit for attending a multilateral conference on Afghanistan.

Speaking at the conference in Islamabad, Swaraj also asked the international community to ensure that the forces of terrorism and extremism do not find sanctuaries and safe havens in any name, form or manifestation.

Her visit to Pakistan comes days after the national security advisers of India and Pakistan met in Bangkok away from the media hype signaling a change in India-Pakistan relations.

Swaraj said the heart of Asia cannot function if arteries are clogged and noted that India's vision for the war-torn country was one of interlinked trade, transit, energy and communication routes, with Afghanistan as an important hub.

"Let me take this opportunity to extend our hand to Pakistan as well. It is time that we display the maturity and self-confidence to do business with each other and strengthen regional trade and cooperation. The entire world is waiting and rooting for a change. Let us not disappoint them," she said.

Swaraj, who was accompanied by foreign secretary S Jaishankar, India's high commissioner to Pakistan T C A Raghavan and envoy to Afghanistan Amar Sinha, said terrorism in that country has grown in both intensity and scope in the last few months and that India was ready to work with the Afghan government to strengthen its defensive capability.