Irregularities in procurement and milling of paddy meant for distribution of rice to the poor through public distribution system (PDS) at subsidised rates have caused losses to the tune of Rs40,564 crore to the exchequer, says a report by the Comptroller and Auditor-General of India. 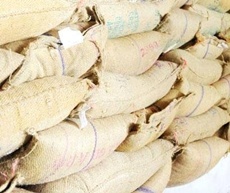 The CAG report tabled in parliament on Tuesday points to undue benefits to the rice millers and discrepancies in payment of nearly Rs18,000 crore as support price to paddy farmers without authentication.

CAG said Rs3,743 crore worth of benefit was passed on to millers by not including the value of by-products in the price they have to pay for milling paddy.

The government, however, refutes this saying the rate paid includes value of by-products like rice husks and rice bran.

CAG listed as many as nine major cases of irregularities, all of which put together add up to Rs40,564.14 crore. There were also a number of smaller cases amounting to the irregularities of over Rs10,000 crore - taking the total amount to well above Rs50,000 crore.

"These deficiencies also contributed to avoidable increase in food subsidy expenditure of the government of India," CAG said about its audit conducted for the period between April 2009 and March 2014.

The CAG also flagged concerns over the quality of paddy procured, saying, it was not clear as to how Chhatishgarh government ensured the minimum quality standards for paddy worth Rs21,115.13 crore procured without necessary checks.

CAG scrutinised records of the central government agency, the Food Corporation of India (FCI), as also that of state governments and their agencies in Chhattisgarh, UP, Bihar, Haryana, Punjab, Odisha, Andhra Pradesh/Telangana.

The CAG has suggested revisiting the existing procurement and milling plans and suggested the government should transfer minimum support price to accounts of farmers directly.

The government, meanwhile, said it has set up a traffic commission to study the milling cost and value of by-products and suggest a new rate by December, based on which the government will decide on revising the milling charges that have not been revised since 2005.

"Delay in revising the milling charges and poor control over custody of paddy/rice resulted in not only undue gains to the rice millers but also widespread and large scale non-delivery of paddy and rice by them," CAG said in the report titled 'Procurement and Milling of Paddy for the Central Pool'.