Justice Tirath Singh, the senior-most judge of the Supreme Court, was today sworn in as the 43rd Chief Justice of India by President Pranab Mukherjee at a brief ceremony at the Durbar Hall of Rashtrapati Bhavan. 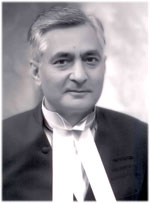 The function at the Rashtrapati Bhavan was attended by Prime Minister Narendra Modi, his cabinet colleagues and former Chief Justices, among others.

''Justice Tirath Singh Thakur was sworn in as the Chief Justice of the Supreme Court of India in a ceremony held today at Rashtrapati Bhavan. He made and subscribed to the oath of office before the President,'' a statement from the Rashtrapati Bhavan said.

Born on 4 January 1952, Justice Thakur will have the tenure as CJI for a little over one year and would retire on 4 January 2017.

Justice Thakur is credited with cleaning up the country's cricket administration that was left in shambles after the IPL spot fixing scam.

It was a bench headed by Justice Thakur which had delivered the verdict to reform cricket controlling body BCCI in the wake of allegations of betting and spot-fixing scandal in the Indian Premier League.

Son of former deputy chief minister of Jammu and Kashmir Devi Das Thakur, a well-known jurist and judge of the Jammu and Kashmir High Court, Justice Thakur enrolled as a pleader in October 1972 and joined the chamber of his father.

He was designated as a senior advocate in 1990. On February 16, 1994, he was appointed as an additional judge of the Jammu and Kashmir High Court and transferred as a judge of the Karnataka High Court in March 1994.

He was appointed as a permanent judge in September 1995 and transferred to the Delhi High Court in July 2004.

He was elevated as a judge of the Supreme Court and assumed charge on 17 November 2009.

His mother Saraswati Thakur and other family members were present at the function.

Justice Dattu praised Justice Thakur and said, "I have full confidence that our institution is in safe hands and will thrive with Justice Thakur at the helm of affairs."