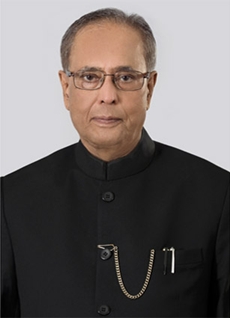 President Pranab Mukherjee today called for freeing public discourse from all forms of violence, physical as well as verbal, saying that real dirt of India lies not in the country's streets but in the minds of the people and in the unwillingness to let go of views that divide society into 'them' and 'us', 'pure' and 'impure'.

Inaugurating a new archives and research centre at Sabarmati Ashram in Ahmedabad today, the President said, ''We live in times when the world needs Gandhiji more than ever. The responsibility we shoulder to spread his word and message is more pressing now than ever before.''

Gandhiji, he said, was not just the Father of our Nation but also the Maker of our Nation. ''He gave us the moral vector to guide our actions, a measure by which we are judged. Gandhiji saw India as an inclusive nation where every section of our population lived in equality and enjoyed equal opportunity. He saw India as a country which would celebrate and constantly strengthen its vibrant diversity and commitment to pluralism. Gandhiji wanted our people to move forward unitedly in `ever widening thought and action'. And most of all, he did not want us to convert the celebration of his life and message into a mere ritual.

''If India leads in moral innovation, all other forms of creativity which we have in abundance - would automatically fulfil the Talisman that Gandhiji gave us, namely, wiping every tear from each eye. The real essence of Gandhiji's legacy and its continuing resonance lies in his injunction to us that all our actions must keep in mind the last person. The last person in India is often a woman, a Dalit or an Adivasi,'' the President said.

The President rued the unprecedented violence all around, which, he said, rises from darkness, fear and mistrust. To combat this ever spiralling violence, he said, India must reinvent the power of non-violence, dialogue and reason.

''We must free our public discourse of all forms of violence, physical as well as verbal. Only a non-violent society can ensure the participation of all sections of the people, especially the marginalised and the dispossessed in our democratic process.

''We must make a success of the laudable and welcome Swatch Bharat Mission. However, this also must be seen as just the beginning of a much larger and intense effort to cleanse minds and fulfil Gandhiji's vision in all its aspects,'' the President said.

He said only those who are confident of their conviction, secure in their faith and rooted in their culture can hope to live in an open house, an open society. If we close ourselves in, seek to be immune from other influences, it shows that we are prepared to live in a house that is devoid of fresh breeze. We must build an open society and be ever ready to engage with diverse ideas and thoughts on equal terms.

The President said Gandhiji was an advocate of knowledge without barriers. Gandhiji's life should be understood as a whole, not piecemeal, and certainly not fragmented. The capacity for compassion and empathy is the true foundation of our civilisation.