Hopes of a thaw on the Goods and Service Tax (GST) Bill emerged on Friday night with Prime Minister Narendra Modi reaching out to the Congress leadership, which will discuss within the party the government's response to its three objections on the measure. 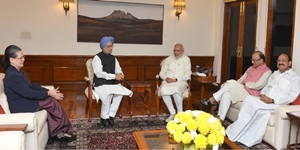 The government will establish "fresh contact" with the Congress once the party completes its internal discussion on the three issues of "their concerns" on which they made their position clear, finance minister Arun Jaitley told reporters after Modi met his predecessor Manmohan Singh and Congress president Sonia Gandhi.

This is the first direct outreach by Modi to the principal opposition ever since he came to power last year in a bid to ensure smooth functioning of Parliament in the winter session.

Modi had invited Singh and Gandhi for a tea at his residence where the discussions covered issues pending before Parliament, particularly the large number of bills that have accumulated over the past two sessions.

After the 45-minute meeting, in which parliamentary affairs minister M Venkaiah Naidu was also present, Jaitley said the Congress leaders put forward their position with regard to the three issues, which they felt were of concern to them.

The Congress's three objections include the demand for specifying the proposed 18 per cent rate in the Constitution bill, opposition to additional one per cent levy on inter-state movement of goods and 100 per cent compensation to states for revenue loss for five years.

"The history and the background of the legislation and the government's response to these issues in detail were also explained to them.

"The Congress party leaders will be discussing within their own party and there would, after sometime, be a fresh contact between the government and them to discuss this subject further after they have discussed within the party and we have also considered the position that they have taken to us," Jaitley said.

While there was no breakthrough at PM Modi-Congress meet, Jaitley said Naidu will be in touch with Congress leaders in both houses to discuss the specific legislations pending in Parliament so that work can proceed next week.

The bill has been stuck in the Rajya Sabha where the BJP-led NDA lacks numbers to ensure its passage.

Naidu, meanwhile, said finance minister Arun Jaitley had held extensive consultations with various states and that the bill has been referred to the select committee and they have made their recommendations.