PM Modi leaves for Ireland, US 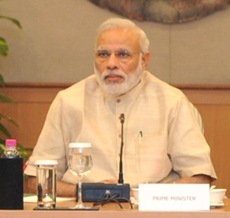 Prime Minister Narendra Modi embarked on a two-nation tour covering Ireland and the United States, early today. The PM has a host of other engagements lined up during his official visit to the two countries.

Modi will arrive in Dublin, Ireland, where he will hold talks with Prime Minister Enda Kenny, the Taoiseach [prime minister] of Ireland. He will also have a brief interaction with the Indian community in Ireland, before emplaning for New York City.

Ahead of the visit, the prime minister had said that India hoped to further develop strong people-to-people and economic ties with Ireland in the years to come.

He will also have a brief interaction with the Indian community before leaving for New York in the evening.

The prime minister will arrive in New York City in the evening (local time), on the US leg of his tour. Modi will be in the US till 29 September.

The ministry of external affairs has planned UN General Assembly and other meetings from 24 to 26 September, while his West Coast itinerary has been chalked out by Prime Minister's Office (PMO).

In New York, Modi will address a UN Sustainable Development Summit and participate in a Summit on peacekeeping being hosted by US President Barack Obama.

Modi will also travel to West Coaston 26 September where he will visit Facebook Headquarters for a Townhall Q&A with its CEO Mark Zuckerberg. He will also visit Google campus and Tesla Motors.

In San Jose, he will interact with the Indian community on 27 September.

''This visit seeks to build on the substantial ground covered during my last visit to USA and President Obama's visit to India early this year,'' he had said.

''I am sure my US visit will be fruitful and further deepen the bond between the world's oldest and largest democracies,'' he said.

The PM will also take part in a lunch hosted by Indian Ambassador Arun Kumar Singh and dine with 400 CEOs.

Tesla CEO Elon Musk has offered to deploy Powerwall, a rechargeable lithium-ion battery for use in residences, in India. Modi is likely to offer Tesla a role in his Smart Cities project.

The PM will also discuss clean technologies and renewable energy at Stanford University.

Modi said he was going to USA at a ''historic moment'' when the UN is celebrating its 70th anniversary.

''India attaches great importance to the United Nations. In July, I had written a letter to heads of governments of 193 nations outlining India's vision for UN agenda and reforms. I am glad that leaders of several nations wrote back appreciating our vision,'' he had said.

This year, India will host a summit of G-4 leaders in New York where the main agenda would be the UNSC reforms.