The Supreme Court has barred all law interns and tightened security in and around the court complex after an anonymous letter threatening to blow up the highest court, Delhi Police said. 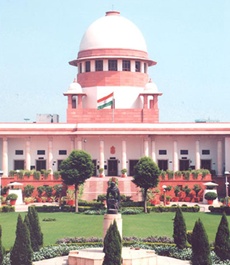 The mail, which came last week, was forwarded to Delhi police by a person who received the threat letter. The person's identity, however, has been withheld for security reasons.

A report published in the Hindustan Times said the police acted immediately after and tightened security cover in and around the Supreme Court complex on Tilak Marg. Security checks have also been increased.

The union home ministry and intelligence agencies were also informed about the threatening email and all agencies responsible for securing the court complex have been asked to remain alert.

''We have received an email in which anti-national elements have threatened a bomb attack at the Supreme Court. We have forwarded the matter to our elite special cell for further probe. It could be a prank but we are not taking any chances,'' the report quoted a senior officer as saying.

Earlier this month, Justice Dipak Misra, who was on the panel that refused to stop the 30 July hanging of 1993 blasts convict Yakub Memon, had received an anonymous threat.

The letter, which was found by security guards in the backyard of the judge's home in Delhi, said in Hindi: "irrespective of the protection you may avail, we will eliminate you."

The police had since reviewed security of the four judges, including the three who decided on Yakub Memon, raising it to a "very high level."

Speaking on the threat to Justice Dipak Misra, Chief Justice H L Dattu had said the Supreme Court had taken measures to deal with such threats. "Our job is to decide the cases and we do it without fear. We do our job and leave the rest," said the top judge.