The Supreme Court today referred to a larger bench a batch of petitions challenging constitutional validity of the National Judicial Appointments Commission (NJAC) Act meant to replace the over two-decade-old collegium system of judges appointing judges. 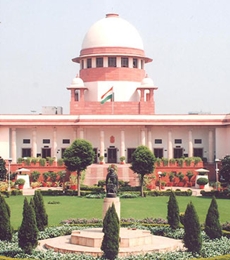 A three-judge bench of justices A R Dave, J Chelameswar and Madan B Lokur, which had reserved its verdict on the maintainability of these pleas, said, "We refer these petitions to a larger bench."

The bench also said that it is not passing any order on interim relief sought by the petitioner and said that these arguments can be raised before the larger bench.

The Supreme Court Advocates on Record Association (SCAORA) and other petitioners had sought a stay on the operation of NJAC Act.

The bench had reserved its judgement on 24 March after Attorney General (AG) Mukul Rohatgi, appearing for the Centre, wrapped up his rejoinder arguments saying that the pleas be dismissed as they were "premature" and "academic" in nature.

Those opposing the new law on appointment of judges for higher judiciary submitted that the issue should be referred to a Constitution Bench of five judges.

Referring to various case laws, the AG had argued that the power of Parliament to make law is "plenary" and hence, the methodology adopted by the legislature in clearing the law on the floor of the House cannot be "tested" by the court.

Rohtagi had made the submission after noted jurists like F S Nariman and Anil Divan and some others had contended that as per constitutional scheme, the NJAC Act should not have been passed ahead of an enabling constitutional amendment.

"Where was the authority to pass the NJAC Act," Nariman had asked and added that the Act should have been passed after the constitutional amendment.

However, Rohatgi submitted that "Only end product can be examined by the courts and it is irrelevant that this Act was passed earlier and that Act was passed later."

"Only an Act, after notification, can be tested in the court of law and not the procedures adopted by Parliament," the Attorney General had submitted.

The apex court had said it could proceed on the merits of the matter only after deciding whether the petitions challenging the validity of the Constitutional Amendment Act and the NJAC Act were maintainable or not.