PM slams judiciary for being swayed by '5-star' activists 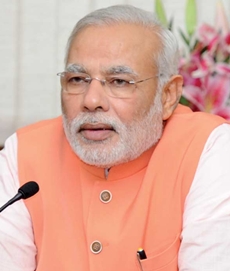 Speaking on the concluding day of the three-day conclave in Goa of Supreme Court judges, chief justices of high courts, and state chief ministers, he virtually accused the judiciary of being driven by ''five-star'' activists, using the term more than once in a sentence without quite defining what he meant by it.

Perhaps at the back of his mind was a Delhi High Court order last month to quash the lookout circular against Greenpeace activist Priya Pillai, who was in January blocked by the government from boarding a flight to London to speak to British MPs.

Modi further said the judiciary should have an internal mechanism of "self-assessment" as judges are considered "divine" and seldom face criticism, unlike politicians. He ignored the fact that this is the case in all genuine democracies.

He said while the judiciary is getting powerful, it should also become "perfect" to live up to the expectations of the people.

"It is easy to deliver judgements based on the law and the Constitution. There is a need to be cautious against perception-driven verdicts," he said, adding that "perceptions are often driven by five-star activists".

"We (the political class) are lucky that people watch us, assess us and rip us apart. You (the judiciary) are not as lucky.

"If you order a person to death, he also comes out and says that he believes in the judiciary ...when there is little scope for criticism, the need of the hour is to develop an internal mechanism for self-assessment where the government and the politicians have no role," the Prime Minister said.

He said if such a mechanism is not evolved and the faith in the judiciary is affected even a little bit, it will hurt the nation.

"If the politicians or the government make a mistake, there is a scope to repair the damage by the judiciary. But if you commit a mistake, then everything will end," he said.

Talking about the scrutiny that the government and political class faces, the Prime Minister said the executive has set up institutions like Election Commission, the Right to Information (RTI) office, and the Lokpal despite knowing that these would place a check on the executive.

Again, he did not mention that none of these initiatives was taken by his or the previous BJP-led government; they all came about during Congress rule.

"Politicians are under increased scrutiny today. Items which did not find a place even in gossip columns of newspapers are become breaking news today," he said.

'Tribunals a hindrance'
Questioning the efficacy of tribunals, Prime Minister Modi expressed concern over the low rate of disposal of cases by them and said there was a need to ascertain whether these institutions were delivering justice or were acting as a "barrier" in it.

He said senior judges of the Supreme Court can brainstorm to find out whether the tribunals are actually fast tracking justice delivery or are slowing it down. Notably, most tribunals are headed by retired judges.

Noting that nearly 1,700 redundant laws have been identified for repeal, he said he hopes to repeal one redundant law per day in his tenure.

The PM said good infrastructure for the Judiciary was a priority for the government, and an amount of Rs9,749 crore had been earmarked for strengthening the judiciary under the 14th finance commission.