The ruling Bharatiya Janata Party received as much money in donations as all other 'national' political parties combined before the 2014 general elections, says a study by the Association for Democratic Reforms ADR, a widely respected NGO. 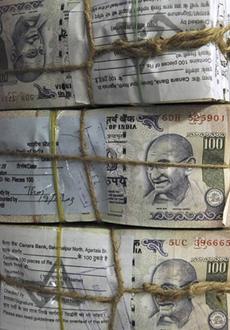 The report released on Monday says the total funds collected by national parties during Lok Sabha elections showed a nearly five-fold growth in the last 10 years, with the BJP topping the list, followed by the Indian National Congress.

At the same time, the total expenditure incurred by national parties in Lok Sabha elections has also risen by nearly four times in the period, according to the report compiled by ADR and National Election Watch.

The report is based on poll expenditure statements submitted by the parties to the Election Commission of India.

It said that total funds collected by the national parties in the last three Lok Sabha polls was Rs2,237.28 crore.

''Over a period of 10 years, funds collected by national parties during Lok Sabha elections increased by 418 per cent,'' ADR said.

The funds were collected over a 75-day period from the date of announcement of elections and the date of completion of polls.

On expenditure, the report said, ''Over a period of 10 years, the expenditure incurred by national parties during Lok Sabha elections increased by 386 per cent.''

The national parties considered for the report are the BJP, Congress, BSP, NCP, CPI, and CPM. These parties incurred total expenditure of Rs2,454 crore during the last three general polls, the report said, while adding that the expenses have exceeded the amount of funds declared to be collected by them during the election period.

The main heads under which political parties declared their expenses are ''publicity, travel, other / miscellaneous expenses and expenditure on candidates''.

''The BJP spent the maximum amount of Rs342.36 crore on media advertisement, followed by Rs 89.56 crore on public meetings and Rs31.35 crore on publicity materials,'' the report said.