Land Bill in stormy weather amid attack from all sides

The government, under attack from its own allies as well as the entire parliamentary opposition over the Land Acquisition Bill, said today it was "open minded" to suggestions; but insisted that the measure was "farmer friendly". 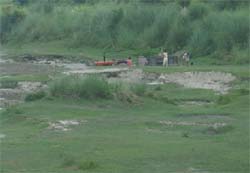 After the Shiv Sena, its partner in the Maharashtra state government, and the Punjab-based Shiromani Akali Dal (SAD), another ally, the Lok Janshakti Party (LJP), said today it has apprehensions over the bill.

"We have objections over some measures. There are questions about the need of doing away with farmers' consent. They also will have no right to move court," LJP MP Chirag Paswan told reporters in Delhi after a meeting attended by six LJP MPs, where the bill was discussed.

The Shiv Sena has already made its opposition clear that it will "not support any law that is against the interest of farmers".

Shiv Sena MP Arvind Sawant questioned government's explanation about the legislation, saying, "When there will be no land left then what is the point of the PM's irrigation scheme? The farmers are scared that the government will take away their land. This needs to be addressed. We cannot make farmers unhappy."

He made the comment while participating in the discussion on motion of thanks to the president's speech.

The fate of the bill is looking increasingly uncertain, with stiff opposition from political parties, farmers and social groups. Activist Anna Hazare has started a rally at a Delhi ground against the bill, which is supported by state Chief Minister Arvind Kejriwal.

Union minister Nitin Gadkari, however, defended the law and accused the opposition of spreading misinformation on the bill.

Addressing a press conference in Parliament House, Gadkari, a senior BJP leader who holds the road transport and highways portfolio, said the ordinance amending the original Act had to be brought before 31 December.

The minister added that the land that would be acquired will be used for rural infrastructure projects like irrigation and roads, which will help the rural population.

Gadkari also said the central government did not intend to acquire any land for the private sector or corporates.

"Even the industrial corridor the ordinance talks about will not be more than 2 km wide, and will host agro-processing industries. It will help farmers," he said.

"It is a misunderstanding that we will acquire land for private sector. The projects which will be in PPP mode (Public-Private Partnership) will be ultimately owned by government," Gadkari said.

He added, "The industrialist today does not want the government acquired land. They prefer buying the land. The land that will be acquired under this law will be used for public purposes."

Asked if the government would consider suggestion made by opposition parties, Gadkari said, "We are open-minded to suggestions."

Hazare rubbished the government's claim that these were more "effective" and "farmer-friendly", saying it was trying to mislead the people.

"The government is more worried about the industrialists and not about farmers. The country has woken up now. These people will take even irrigated land and give it to industrialists," Hazare said.

Having vociferously protested against the land ordinance for the last two days, the activists are now gearing up for a massive showdown with the government at district and state levels.

"We are beginning a district level movement from next week against the land bill," said Gandhian activist P V Rajagopal.

He said that the focus would now be on mobilisation and training of youth for a final showdown in 2019, a year which coincides with the completion of five-year term of Prime Minister Narendra Modi government.

"The government may not be able to ignore this and engage us in a dialogue process," he added.