President Pranab Mukherjee today addressed a joint session of both houses of parliament., saying the fundamental tenet of the government was 'sabka saath, sabka vikaas'. 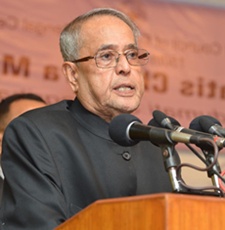 "Within a span of nine months my government has embarked on a comprehensive strategy for unleashing the economy," he said. "My government has worked for the welfare of the poor, the marginalised and the vulnerable sections of society."

He also said the government has attached highest importance to sustainable socio-economic growth of rural India.

"Swachhata (cleanliness) is an article of faith for my government," President Mukherjee said while talking about the Swachhta Abhiyaan which has been launched for a clean and open-defecation free India by 2019.

He also urged MPs to spend 50 per cent of their discretionary funds on the Swachh Bharat programme.

The government, which is looking to pass several key legislations, is likely to face a stormy session despite its promise to walk the ''extra mile'' to accommodate the opposition's concerns.

Ahead of the session, Prime Minister Narendra Modi reached out to opposition parties at the customary all-party meet, saying there should be a constructive debate on all major issues. He also went out of his way to visit Congress president Sonia Gandhi on Sunday.

"I am hopeful that the budget session will function in a positive environment and everyone will work in this direction to do something good," the PM told reporters outside parliament.

On Sunday, Modi assured the opposition of addressing all its concerns as his government sought support for the bills that will replace six ordinances, including the one that aims to overhaul the land law.

The budget - to be presented on February 28 - will be closely watched for the economic path the government charts. The session will be a test of the NDA's floor management skills with a heavy legislative agenda lined up.

"I can assure you that all the issues you have referred to will be discussed adequately and appropriately," the PM told an all-party meet Sunday evening.

The Congress, however, remained non-committal, saying it couldn't back bills that were "anti-people".

"We have some concerns about the land law amendments," sources quoted Sonia Gandhi as saying.

It was the first official engagement between the Modi government and the Congress president.

Farmers and social activists, led by Anna Hazare, are planning a sit-in against the land bill, which aims to make land acquisition easy for industry, to coincide with the opening day of the session.

While another contentious legislation - the insurance bill - wasn't discussed, Sonia did tell the NDA representative that it would be "good" to have a detailed discussion on other ordinances as well, sources said.

At the all-party meeting, Modi said it was the collective responsibility of leaders of all parties to ensure that the session ran smoothly.

However, observers point out that his party is hardly in a position to make such a demand, seeing that the BJP made a point of disrupting every session of parliament under the previous UPA government.