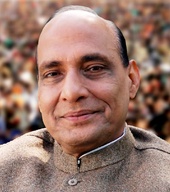 Union home minister Rajnath Singh today said the culprits involved in the suspected corporate espionage case would not be spared.

"I won't rule out any possibility ... the investigation is going on and the culprits will not be spared. Delhi Police is investigating the matter, I think it will soon be disclosed how all these things were happening," he said.

In contrast to the previous UPA government led by Manmohan Singh, the home minister actually sought to take credit for exposing a scam that was going on right under its nose. He said the central government should be commended for revealing the events.

"It should be commended that our government revealed all this that was happening since a long time. Had we not been aware, then these things would never have come to light," he added.

Executives from five leading energy companies, a former journalist and an energy consultant were arrested on Friday, taking to 12 the number of arrests made so far in connection with the alleged leak of official documents from the petroleum ministry. Police sources said two senior officials from the ministry were also under the scanner.

While producing seven of the accused in a Delhi court, police said recoveries suggested that papers related to the coal and power ministries too had been leaked.

Police sources said the executives were recipients of official documents that were allegedly leaked from the petroleum ministry.

Former journalist Santanu Saikia, who heads the Indian Petro Group, and Pryas Jain, CEO of oil and gas consultancy Metis India, were remanded in police custody until 23 February, along with two others arrested a day earlier - Rakesh Kumar and Lalta Prasad.

Three others - government employees Asharam and Ishwar Singh, and driver Raj Kumar Chaubey - will be in judicial custody for 14 days.

Police said they had recovered keys to offices of two senior officials in the ministry from Asharam and Singh and both officials were also on the police radar.

A Reliance Power spokesperson said, ''We are not aware of the circumstances in which one of our junior employees has allegedly been arrested. We will ensure full cooperation with the investigative agencies. The company adheres to the highest standards of corporate governance, and does not support any unlawful practices.''

Police Commissioner B S Bassi said, ''We have arrested two energy consultants, Santanu Saikia and Pryas Jain, and more arrests are likely. We have still not included the Official Secrets Act in the FIR as the documents recovered from the accused need to be analysed to see if they fall under the ambit of the Act.''