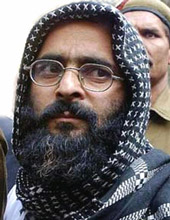 Congress leader and former union minister Shashi Tharoor once again embarrassed his own party as he that the hanging of Afzal Guru, convicted for an attack on parliament was "wrong and badly handled".

Guru was hanged exactly two years ago, with the then-ruling Congress pushing through the case with unusual haste in a move that was widely criticised (See: Afzal Guru hanged; Kashmir locked down under curfew).

"I think the hanging was both wrong & badly handled. Family should have been warned, given a last meeting & body returned," Tharoor, an MP from Kerala, tweeted on Monday.

His comments follow Congress lawmakers in Jammu & Kashmir saying in a signed statement that Afzal Guru's hanging was a "mistake".

The statement said, "The demand for clemency to Guru was justified and his mortal remains should be returned to his family. The decision to not allow his family members to meet him one last time was also a mistake."

Guru was held guilty of plotting the 2003 Parliament terror attack and was hanged at Delhi's Tihar Jail on 9 February 2013, and buried within the jail premises. His family was not informed, and news of his hanging was suppressed for a couple of days.

Vikar Rasool, one of the five J&K Congress legislators who signed the statement, said the "party completely agreed" with the sentiments expressed in the statement.