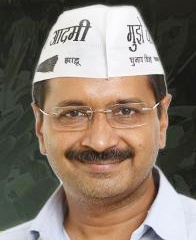 Arvind Kejriwal's Aam Aadmi Party looked set to form the government in Delhi, winning the assembly elections with a clear majority of 38 seats, if exit polls are any indication.

With over 67-per cent of the nearly 13.3 million voters exercising their franchise till 6 pm, exit polls have forecast the AAP to win 38 seats, BJP and its ally Akali Dal 28 seats and the Congress a mere four seats in the 70-member assembly.

The polls, aggregated by Nielsen, C-Voter, Cicero, News Nation, take into account voting till 3 pm today. Polling in the capital closed at 6 pm.

The most optimistic projection for AAP comes from Today's Chanakya, which has projected 48 seats for the Aam Aadmi Party, putting BJP second with 22 seats, while predicting a wipe out for the Congress in the national capital.

Delhi, clearly seems fed up with the political bigwigs and despite having to vote twice in just over a year, demonstrated the will to deliver with an estimated 67 per cent voter turnout.

Kejriwal, who had resigned as chief minister after 49 days in office last year, has asked Delhi to give him another chance. Bedi is a former police officer and activist who is contesting her first election and has promised sweeping changes in Delhi.

The two were associated with Anna Hazare's hunger-strike in 2012 and were once comrades, but were estranged by Kejriwal's sudden move to adopt a political approach, which, according to him is the only route to cleansing the political system and the administrative machinery.

"Friends, please prepare for February 14. The common man will celebrate Valentine's Day too. Please do come to the Ramlila Ground wearing a muffler," Arvind Kejriwal tweeted after polling ended in the capital today.

In a bid to insulate Prime minister Narendra Modi from the tint of an electoral debacle, the BJP has already said today's election cannot be considered a test of PM Modi's popularity.