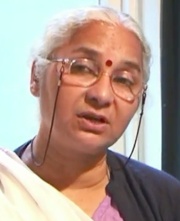 The union cabinet's decision to recommend the promulgation of an ordinance amending the land acquisition Act 2013 is solely intended to forcibly acquire 3.9 lakh hectares of land for Delhi-Mumbai Industrial Corridor, says social activists.

National Alliance of People's Movements (NAPM), the apex body of several mass organisations operating across India, said the government's move to amend the Act even before the law has been actually implemented is ''completely unacceptable.''

Stating that it reminded one of ''the anti-democratic and authoritarian streak of the NDA government,'' the NAPM, wondered what was the ''emergency'' for the NDA to take the ordinance route.

''This is only being done as a measure to benefit the corporate houses and nothing else. Rs20,00,000 crore investments are not stuck because of the new land Act, since the law has only been in existence for one year'', NAPM, which is led by well-known social activist Medha Patkar, said.

NAPM claimed that the government has worked out plans to acquire 3,90,000 hectares of land for the DMIC alone, adding, ''Industrial corridors, big infrastructure projects, dams etc cause the maximum displacement and environmental damage, and the new land Act was to address situations arising out of that.''

The NDA government is ''completely anti-poor'' and is ''only interested in pushing forward the corporate agenda,'' NIPM said and called it ''an Ambani-Adani Sarkaar - a Company Sarkaar, which is out to sell the democratic rights of the people and democratic traditions of law making in the Parliament in the name of business.''

The Act was promulgated last year after seven-year-long deliberations and went through two Parliamentary Standing committees (in 2007 and in 2009), it added, ''both headed by senior BJP leaders, Kalyan Singh and Sumitra Mahajan.''

NAPM further said, ''Modi has displayed least patience for the parliamentary traditions and often remained silent on the key issues concerning the nation and blamed opposition for non-functioning of the Parliament. Matters concerning the lives of millions of the farmers in this country can't and shouldn't be decided by mere Ordinance.''

It added, ''These are matters of grave importance and need thorough debate and discussion in this democracy. BJP when in opposition had opposed the Ordinances for law making and now they are doing exactly that.''

Contesting the government's claim that the amended land acquisition Act is not anti farmer since they are not touching the compensation issue, NAPM said, ''The issue is not only compensation. A piece of land is important for many sections, including workers, share croppers, others who are not land owners. They all get affected by any acquisition. So, changes in the consent clause for acquisition of the PPP and private projects will impact everyone and not only the land owners.''

''The explanation that an Ordinance became necessary to deal with matters arising out of the Section 105 of the Act is completely false. We believe, it is not only misleading but again obfuscating what the Act mandates. As per the Act, the government was to bring a notification in Parliament in 2014 to extend the provisions of the compensation and rehabilitation and resettlement (R&R) to the people affected by land acquisition carried through the 13 central Acts, as mentioned in Fourth Schedule.

''The dilution of the need for the consent and conducting of the Social Impact Assessment for all the projects is completely uncalled for and will only make matters worse. These two provisions are central to addressing the issue of 'forced land acquisition' and 'resulting impoverishment' to communities,'' it added

Warning resistance, NAPM said, working people will unite and raise their voices against ''unjust displacement pushed by the Modi Sarkaar. The resistance will only become much more vocal now. People's movements from across the country oppose this Ordinance and will organise demonstrations across the country this week and will ensure that resolutions are passed in the Gram Sabhas on the Republic Day that no forcible land acquisition will be allowed.''

Medha Patkar today described as "undemocratic and pro corporate" the centre's recommendation for promulgation of an ordinance to amend the Land Acquisition Act and urged President Pranab Mukherjee not to give his assent to the measure.

"The decision is undemocratic and pro corporate. We appeal to the President to show courage, take a position on this sensitive matter and not give his nod," she said.