The government today approved the promulgation of an ordinance to hike foreign direct investment (FDI) cap in the insurance sector to 49 per cent from the current 26 per cent, while re-promulgating an ordinance for re-allocation of coal blocks cancelled by the Supreme Court in its judgement in September. 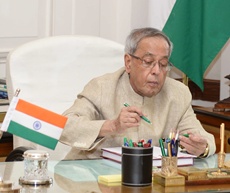 With President Pranab Mukherjee signing his approval for re-promulgation of the Coal Ordinance (Special Provisions) Act, 2013, the government will kick-start the process of coal block re-allocation without waiting for the Rajya Sabha approval.

The Lok Sabha has already passed the ordinance and the ministry of coal is expected to go ahead with the issue of 24 tenders on 27 December for coal block allocation.

However, the government is empowered to enact a law through an ordinance signed by the President without going through the legislative process, such a law ceases to operate six weeks from the reassembly of Parliament and the government can re-promulgate the ordinance unless it is explicitly rejected by one of the houses.

The ordinance will address issues related to coal supply to companies of central and state governments, as well as private companies in the cement, steel and power businesses. It will also address valuation of the land to be taken over from those who have lost coal blocks.

The hiking of the foreign investment cap in the insurance sector to 49 per cent, which has been pending since 2008, is expected to result in capital inflow of $6-8 billion, according to finance minister Arun Jaitley.

''The ordinance demonstrates the firm commitment and determination of this government to reforms. It also announces to the rest of the world including investors that this country can no longer wait even if one of the houses of Parliament waits indefinitely to take up its agenda,'' he had said.

The Insurance Laws Amendment Bill, 2008 could not be taken up for discussion in Parliament despite being approved by the Select Committee of the Rajya Sabha because of the uproar over the conversion and other issues.

DMK chief M Karunanidhi slammed the centre for adopting the "backdoor" route of ordinance to increase FDI limit in insurance sector, saying it amounted to "mockery of parliamentary politics." The former Tamil Nadu chief minister had also earlier appealed President Pranab Mukherjee not to grant approval to the ordinance.