Making a strong pitch for a rate cut by the Reserve Bank of India, chief economic adviser to the government Arvind Subramanian on Tuesday said there was a need to boost investments to achieve the potential economic growth rate of 7-8 per cent in the next few years. 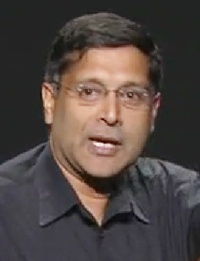 He also hinted at ''other measures'' to generate additional revenues if it appeared difficult to meet fiscal deficit targets this year with planned Rs60,000-80,000-crore expenditure cut.

With inflation declining significantly, there was ''room to make monetary policy loose'', he said, adding that the call would be taken by the RBI.
The central bank, which is keeping the interest rates high at 8 per cent since January, said it could lower them even before the next policy announcement, which is due on 3 February.

While the government has been pitching for a rate cut for quite some time, this has not found favour as yet with RBI Governor Raghuram Rajan, who himself was CEA before moving to the RBI as its governor in September 2013.

Referring to concerns facing the economy, Dr Subramanian said it would be a challenge to restrict the fiscal deficit to 4.1 per cent in the year ending March, 2015.

He also hinted at some additional revenue measures, in case the expenditure cuts of around Rs60,000-80,000 crore were found insufficient to meet the deficit target.

''At this stage, we feel confident that we can meet it with expenditure cuts. If that's not going to be possible, we will look at other measures,'' he said.
The government, he added, was ''absolutely committed'' to achieving the fiscal deficit target.

Stressing the economy has turned around and inflation has come down significantly, Dr Subramanian exuded confidence that the current fiscal would end with a growth rate of 5.5 per cent, up from 4.7 per cent in the previous year.

''We should be growing no slower than 7-8 per cent that is the potential rate of growth we can grow for next 20 years. We should be able to get back to that in a couple of years provided we do reforms and take some other action,'' he said.

On investments, he said the private sector was facing high debt problems and, hence, it was imperative to boost public investment to improve the business climate.

Dr Subramanian said economic indicators had improved enormously as inflation was coming down, the current account deficit was under control and stock markets were booming.