The Supreme Court told the union government on Thursday to convene a meeting of chief secretaries of all the states within 10 days to ascertain the steps taken by them so far to provide shelter to homeless persons in urban areas. 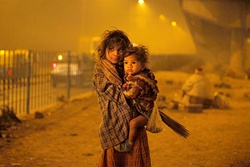 A three-judge bench headed by Chief Justice H L Dattu also asked the union urban development ministry to "find out ways and means to provide necessary temporary shelter to all homeless people in the entire country".

The bench observed, "It is desirable that a responsible person of the urban development ministry call a meeting of chief secretaries of all the states to find out what steps they have taken in implementing the scheme of urban homeless people," the bench, also comprising Justices Madan B Lokur and A K Sikri, said.

It said that a report giving details of the actions taken so far, be filed within three weeks and the meeting of the chief secretaries has to be convened within 10 days.

During the brief hearing, the bench said that it will not hear the matter relating to homeless persons in the national capital as the Delhi High Court is already seized of it and has been monitoring the developments.

Perusing the affidavit filed by some of the states, the bench said, "We can make out nothing from the affidavit. It's not clear as to what they have done."

The counsel for Delhi, however, said that 231 night shelters have been set up in the national capital and out of them, 84 are permanent and they can provide shelters to 17,000 homeless people.

Prashant Bhushan, appearing for one of the parties, said that as per the census of the Delhi government, there are 39,000 homeless people in the city alone and the government claims that it can provide shelters to 17,000 persons only.

Moreover, these shelters lack basic civic facilities like water and sanitation, he said.

Earlier, the apex court had asked the state governments of Uttar Pradesh, Delhi, Haryana, Rajasthan and Himachal Pradesh to build sufficient shelters ahead of the winter, saying they will have to face consequences if they fail to do so.

The bench was hearing a PIL filed by advocate E R Kumar seeking direction to governments to build shelters, as many homeless people die due to cold.

The apex court had earlier passed a series of orders for providing shelter to homeless people, saying that right to shelter is a fundamental right.

"Nothing is more important for the State than to preserve and protect the lives of the most vulnerable, weak, poor and helpless people.

"The homeless people are constantly exposed to the risk of life while living on the pavements and the streets and the threat to life is particularly imminent in the severe and biting cold winter, especially in northern India," the apex court had said.