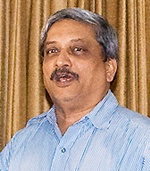 Prime Minister Narendra Modi is reported to have picked Manohar Parrikar, currently the chief minister of Goa, as the new defence minister in the central cabinet, so as to relieve finance minister Arun Jaitley of the additional portfolio.

Parrikar is expected to resign from his current responsibility and take up a bigger role at the centre, reports said, adding that the prime minister wanted him to join the cabinet as defence minister.

Currently, finance minister Arun Jaitley holds the additional charge of defence ministry and, with the start of budget preparations for 2015-16, Jaitley is likely to be relieved of his additional burden as early as possible.

Parrikar, an IIT Bombay graduate, is considered an energetic, efficient and tough decision maker. He is also one of the favourites of the RSS.

Sources said Modi has already spoken to Parrikar on the subject when he met him during one of the stopovers while campaigning in Maharashtra.

But the matter did not progress at that time as Modi was busy with campaigning for elections.

Along with Parrikar, Modi is expected to induct some new faces as well when he reshuffles the cabinet, reports said.

The move has been necessitated due to many reasons, mainly the overburdening of some ministers.

Also, Jayant Sinha, son of former union minister Yashwant Sinha, is expected to be inducted in the Modi cabinet.

Modi is looking for lighter but more efficient ministers in his cabinet. Except for Jaitley, Sushma Swaraj (external affairs) and Rajnath Singh (home), there are no political heavyweights in Modi's cabinet.

Also, both Sushma and Rajnath, although heavyweights, have bureaucratic heavyweights to lighten and overlook their tasks.

The timing of the cabinet expansion is yet to be decided. Much will also depend on the state-level alliances like that in Maharashtra where the Shiv Sena is yet to join the government.

The cabinet expansion is likely to take place before the winter session of Parliament, which begins on 24 November.

The prime minister will be leaving for his home constituency, Varanasi, for a two-day tour on 7 November. He has also several foreign trips lined up later this month. On 12 November, Modi will leave for Myanmar for the Asean-India and East Asia Summits. From Myanmar, Modi will leave for Australia on 14 November for the G20 summit. Modi has scheduled a bilateral summit with Aussie PM Tony Abbott after the G20 meet.

In the third week of November, Modi will visit Nepal for the SAARC summit. The PM is supposed to travel to Janakpur and Lumbini in Nepal.

Later, in November and December, Modi would be busy, attending to winter session of Parliament and campaigning for the BJP in Jharkhand and Jammu & Kashmir.

It is likely that the cabinet expansion takes place before Modi leaves for Myanmar and Australia.