Finance minister Arun Jaitley today said any disclosure of the names of persons who are in the list of those who have money illegally stashed abroad will only cause embarrassment to the Congress. 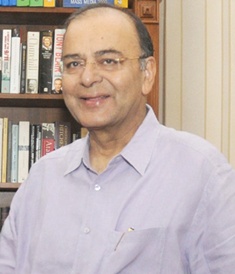 Hitting back at the Congress's criticism of the Modi government going on the back foot on black-money issue, Jaitley said, ''The names will be public shortly  I can assure you there is no embarrassment I (BJP) will have when all the names are disclosed. There is some embarrassment the Congress party will have because of those names,'' he said.

Jaitely revealed this during an interview to English news channel NDTV.

Jaitley said the names of those black money account holders against whom charges are filed by Indian authorities would be disclosed in the court shortly. He said India's double taxation avoidance agreement with Germany does not restrain it from disclosure of names in a court.

"Media said we are not going to disclose it. Our case was we will disclose it as per the due process of law," the minister said.

Jaitley said the Congress got it all wrong because media "completely misreported" the case.

Jaitley on Friday said Switzerland had agreed to share information on illicit money stashed away by Indians in select cases but said a 1995 agreement with that country is acting as a constraint in disclosing names of the account holders.

The finance minister said the Swiss authorities have agreed to give information related to HSBC and Liechtenstein lists, provided there was independent evidence collected by Indian authorities, meaning it won't act on leaked information.

The Swiss authorities would ''confirm the genuineness or otherwise'' of details of foreign accounts of Indian citizens procured by intelligence agencies before offering to part with information on secret bank accounts.

Also, he said, the Swiss Federal Tax Administration has agreed that its competent authority would assist India in obtaining confirmation of genuineness of bank documents on requests by the Indian side and also swiftly provide information on requests relating to non-banking information, according to the finance ministry.