BJP set to form government in Haryana and Maharashtra

The BJP is all set to form government in Haryana with a clear majority in the assembly elections while it has emerged as the single-largest party in Maharashtra, where it would need an ally to form government. 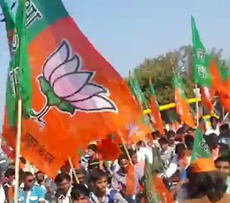 As results trickle in, BJP is emerging as the single largest party in the state both BJP and Shiv Sena saying there is no love lost between the two Maharashtra, the BJP and Shiv Sena, recently estranged, are returning to niceties. The BJP will get the most seats, but will need about 21 more to form the government.

Meanwhile, amidst speculation about a possible reconciliation with the Shiv Sena, Sharad Pawar's Nationalist Congress Party (NCP) has come out in the open offering external support for the largest single party to form government in the state.

The BJP is leading in 124 of Maharashtra's 288 assembly seats, but is still 21 short of a majority. The Shiv Sena is set to finish a distant number two with 58 seats. Formers partners Congress and NCP are battling for third place with 43 and 42 seats.

In Haryana, the BJP is ahead in 48 of the 90 seats and is set to conquer new territory on its own. The Indian National Lok Dal is set to get 20 and the Congress only 15.

With the NCP offering to support the BJP from outside to form a government in Maharashtra, pressure is mounting on the Shiv Sena to reunite with its now-estranged ally the BJP.

In Haryana, the BJP has a clear majority and has crossed the half-way mark of 45 and was leading in two more constituencies at the time of this report. The party needs to win 46 seats to secure a simple majority in the 90-member assembly.

While BJP president Amit Shah asserted that his party will have CMs in both states, with a fractured mandate in Maharashtra, developments in the state are being closely watched.

"There will be a BJP CM and a BJP government in Maharashtra", was the emphatic statement from Shah.

Senior NCP leader Praful Patel said his party would support the BJP as it was the single largest party and could, hence, provide a stable government.

The NCP's offer came even as BJP leaders appeared inclined to ''go with like-minded parties" - Shiv Sena. BJP's likely CM candidate in Maharashtra, Devendra Fadnavis, said, "A decision on this will be taken by the BJP parliamentary board."

Earlier, BJP leaders made friendly overtures to the Shiv Sena with party leader Piyush Goyal saying, "What happened during the last 20 days cannot determine the fate of a relationship which lasted 30 years."

Senior BJP leader LK Advani said, "It will be good if the old relationship between the BJP and the Shiv Sena is revived. I had said earlier too that this relationship should not have broken up."

Uddhav Thackeray's Sena, however, preferred to keep its options open, saying it will "work with any party which works in the best interests of Maharashtra."

Both the Shiv Sena and the BJP are playing hide-and-seek and are not yet ready to reveal their intentions. The BJP is reluctant to take the initiative in inviting the Sena as it would cost the party more.

The BJP, however, unlikely to seek support of the NCP, which is considered as one of the worst corrupt among national parties.

Shiv Sena leader Sanjay Raut said that the party will not take a decision now. We have come to know that NCP has offered support. They are the ''Nationalist Corrupt Party''.

No decision has been taken as yet, talks are still on, Raut said, adding that there is no need for the Shiv Sena to take a quick decision. We contested alone and have done well, he added.