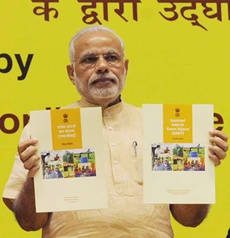 Development, he said, should suit the aspirations of the people living in the area and should not be super-imposed.

Under the scheme, every Member of Parliament (MP) will adopt one village in his constituency by 2016 and two more by 2019. The 'Adarsh Gram' will help maintain health, cleanliness, greenery and cordiality within the community.

The prime minister called on members of legislative assemblies (MLAs) also to adopt a village on the lines of the Saansad Adarsh Gram Yojana (SAGY).

''In Delhi, Lucknow or Gandhinagar, a scheme is prepared and then an attempt is made to inject it everywhere. Through this 'Adarsh Gram', we want to shift from a supply-driven to a demand-driven model,'' he said while launching SAGY today.

The scheme aims to ensure that every MP takes responsibility for developing physical and institutional infrastructure in villages. The prime minister feels that development in one village will have a 'viral effect' on the surrounding villages, as others will also try to be on a par with the 'Adarsh Gram' or model village.

The MP will be free to choose any village in his constituency. However, he cannot choose his own village or that of his in-laws (sasural), he clarified.

MPs from the Rajya Sabha can select any village of the state that he or she represents. At the same time, a nominated member can choose any village in the country. ''This is not a scheme about money. It is people-driven and guided by people's participation, guided by the MPs. Those elected from the cities, I urge you to look at a village that is close to your city,'' he said.

The prime minister himself has chosen a village for Varanasi. ''I have received the guidelines. I will go there, discuss and decide in the next 15-20 days,'' he said.

Speaking at the launch of the project by the prime minister, rural development minister Nitin Gadkari said that Saansad Adarsh Gram Yojana (SAGY) will change the rural landscape of India.

Gadkari said each Member of Parliament will take the responsibility of developing physical and institutional infrastructure in three villages by 2019, of which one would be achieved by 2016. Thereafter, five such Adarsh Grams (one per year) will be selected and developed by 2024.

The project, launched on the occasion of birth anniversary of Lok Nayak Jai Prakash Narayan, aims to keep the soul of rural India alive while providing its people with quality access to basic amenities and opportunities to enable them to shape their own destiny. Gadkari said the principles and values upheld by Mahatma Gandhi are inculcated in the scheme, which places equal stress on nurturing values of national pride, patriotism, community spirit, self-confidence and on developing infrastructure.

The scheme is both unique and transformative as it has a holistic approach towards development. It envisages integrated development of the selected village across multiple areas such as agriculture, health, education, sanitation, environment, livelihoods etc.

Gadkari informed that his ministry is running 66 schemes for the development of rural areas and villages.

Speaking on the occasion, minister of state for rural development Upendra Kushwaha said the scheme will be implemented through a village development plan that would be prepared for every identified gram panchayat with special focus on enabling every poor household to come out of poverty.

He said the constituency fund, MPLADS, would be available to fill critical financing gaps. The planning process in each village will be coordinated by the district collector with the MP playing an active facilitating role in the exercise.

Kushwaha said the strengthening of local democracy through strong and transparent gram panchayats and active gram sabhas and facilitating good governance is also an important objective of SAGY.

Women's participation in the decision-making process will be encouraged, he said, adding that the scheme in fact envisages holding Mahila Sabhas and Bal Sabhas to discuss women and children specific issues and concerns.

The MPs are the pivots this scheme will run on. Gram Panchayat would be the basic unit for development. It will have a population of 3,000-5,000 in plain areas and 1,000-3,000 in hilly, tribal and difficult areas. In districts where this unit size is not available, gram panchayats approximating the desirable population size may be chosen.