Ready for talks with Pakistan, but without shadow of terror: Modi

Prime Minister Narendra Modi told the UN General Assembly today that India has always raised its voice for justice, dignity and opportunity. He said the country is fully aware of the fact that its future is linked very closely with its neighbours and that was why from first day his government extended a hand of friendship to neighbours. 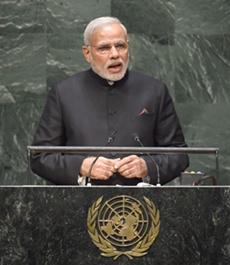 Addressing the UN General Assembly in Hindi, Modi said: '' I am prepared to engage in serious bilateral dialogue with Pakistan in a peaceful and violence free atmosphere.''

It is up to Pakistan to create the right atmosphere and come forward for bilateral talks. Terrorism is appearing in new forms and no country - big or small - is free from it. ''Good terrorism, bad terrorism raises questions on our sincerity to fight terrorism,'' he said.

''As India's prime minister, it is a great honour to address you for the first time. I am aware of hopes and aspirations of people of India. I also know what the world expects from the 1.25 billion people of India,'' he said, adding that the philosophy that guides the nation is `Vasudhaiva Kutumbakam' - that the whole world is one family.

While stating that India has firm belief in multilateralism, Modi wondered why with the flags of 193 nations flying at the United Nations, the world's nations are going after groups - the G-platforms.

''We need to think how to create a G-all atmosphere when UN is about to celebrate its 70 years. Come let us work towards peace. We need to respond to the demands of our times. One nation can't dictate the world,'' he said.

Modi, who is on a five-day tour of the US, will address a gathering at the Madison Square Garden on Sunday and meet President Barack Obama for bilateral meetings.