Prime Minister Narendra Modi will spend his 64th birthday today at a private dinner with Xi Jinping in Ahmedabad, where the Chinese president has landed on his two-day India visit that is expected to set a new agenda for India-China ties. 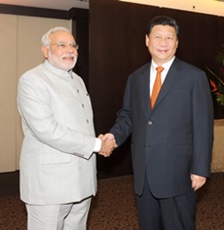 Modi moved quickly to engage with China after taking office in May, and has pulled out all stops for Xi's first state visit to India.

In Ahmedabad Xi was greeted with giant billboards in Mandarin, Gujarati and English welcoming him.

But Modi has also made evident his distrust of China's expansionist tendencies, and intends to pursue a more muscular foreign policy than the previous Congress-led government.

But both sides say they want to focus on economic cooperation, with India seeking Chinese funding for a planned overhaul of its railways and cooperation in nuclear energy.

China is India's biggest trading partner, with annual two-way commerce of more than $65 billion. But Indian data shows the trade deficit with China has soared to more than $40 billion from just $1 billion in 2001-02.

Modi, who ran for election promising to revive India's flagging economy, called for more Chinese investment when he met Xi in Brazil in July.

China meanwhile is eager to cement its relationship with its western neighbour at a time of heightened tensions with Japan and several Southeast Asian nations over disputed territory.

Modi has spoken of his admiration for China's economic growth in the last decade. But he also enjoys a close relationship with Japan's President Shinzo Abe, and analysts have said he may be able to leverage Beijing's rivalry with Tokyo to secure Chinese investment.

China's consul-general in Mumbai Liu Youfa said ahead of the visit that Xi would "commit investments of over $100 billion", pointing out that this was three times the amount pledged by Japan during a visit by Modi earlier this month.

Xi heads to India after visiting the Maldives and Sri Lanka as China increasingly asserts its influence in a region that has traditionally come under India's sphere of influence.

The refuge given by India to the Dalai Lama, Tibet's exiled spiritual leader, is another source of tension between India and China, and New Delhi is on alert for any protests during Xi's visit. In fact, Tibetan groups have already announced a protest.

Xi will visit Gandhi's former hermitage, now a museum, and have dinner with Modi in a tent on the riverbank in Ahmedabad, where he is expected to announce plans to build a Chinese-funded industrial park.

On Thursday he will hold formal talks with Modi and President Pranab Mukherjee in New Delhi and sign a series of agreements with the Prime Minister, before departing for China on Friday.